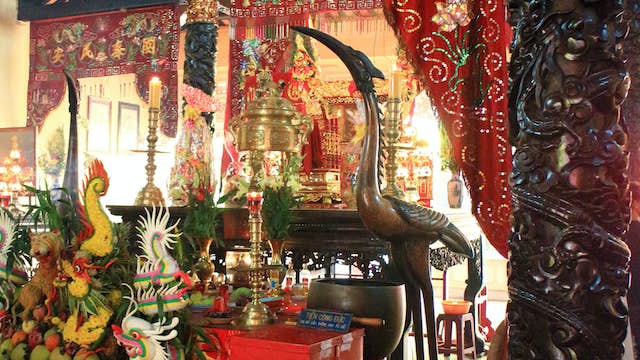 Dedicated to Marshal Le Van Duyet (1763–1831), this shrine is also his burial place, alongside that of his wife. The marshal was a South Vietnamese general and viceroy who helped defeat the Tay Son Rebellion and reunify Vietnam. Among the items on display are a portrait of Le Van Duyet, personal effects including European-style crystal goblets, two life-size horse statues and a stuffed, mounted tiger. The temple is reached by heading north from Da Kao on Ð Dinh Tien Hoang.

When the Nguyen dynasty came to power in 1802, he was elevated by Emperor Gia Long to the rank of marshal. Le Van Duyet fell out of favour with Gia Long’s successor, Minh Mang, who tried him posthumously and desecrated his grave. Emperor Thieu Tri, who succeeded Minh Mang, restored the tomb, thus fulfilling a prophecy of its destruction and restoration. Le Van Duyet was considered a national hero in the South before 1975 but is disliked by the Communists because of his involvement in the expansion of French influence.

During celebrations of Tet and on the 30th day of the seventh lunar month (the anniversary of Le Van Duyet’s death), the tomb throngs with pilgrims. The caged birds for sale in and around the grounds are bought by pilgrims and freed to earn merit. The unfortunate creatures are often recaptured (and liberated again).