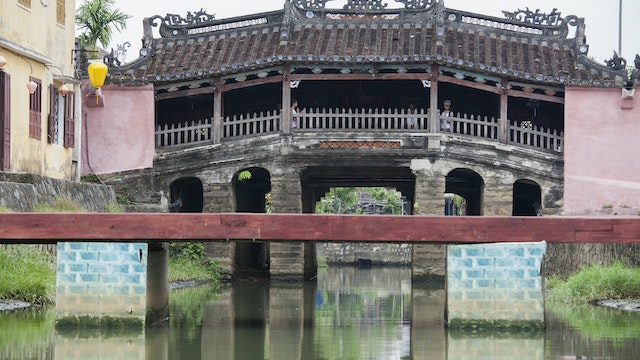 Emblematic of Hoi An, this beautiful bridge was first constructed in the 1590s by the Japanese community to link it with the Chinese quarters. Over the centuries the ornamentation has remained relatively faithful to the original Japanese design. When you cross using your Old Town ticket, one of the stubs will be snipped away, so if you cross the bridge again, just say your ticket stub for the bridge has been taken already, otherwise the ticket checker will remove another stub.

The structure is solidly constructed because of the threat of earthquakes. The entrances to the bridge are guarded by weathered statues: a pair of monkeys on one side, a pair of dogs on the other. According to one story, many of Japan’s emperors were born in the years of the dog and monkey. Another tale says that construction of the bridge started in the year of the monkey and was finished in the year of the dog. The stelae, listing all Vietnamese and Chinese contributors to a subsequent restoration of the bridge, are written in chu nho (Chinese characters) – the nom script had not yet become popular.

The French flattened out the roadway for cars, but the original arched shape was restored in 1986.