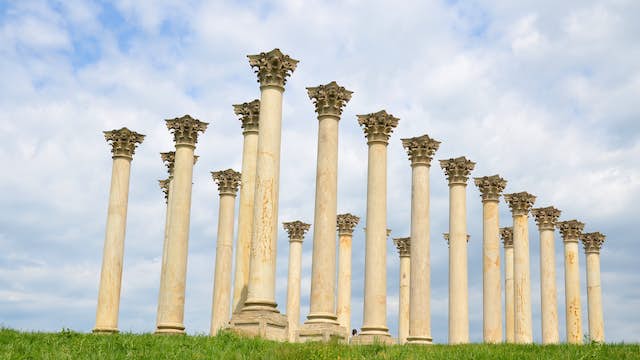 The greatest green space in Washington unfurls almost 450 acres of meadowland, sylvan theaters and a pastoral setting that feels somewhere between bucolic Americana countryside and a classical Greek ruralscape. Highlights include the Bonsai & Penjing Museum (exquisitely sculpted mini trees), the National Herb Garden (lots of hot peppers) and the otherworldly Capitol Columns Garden (studded with Corinthian pillars that were once part of the Capitol building). All are near the R St entrance.

A short distance onward, the National Grove of State Trees rises up. It sprouts everything from New York's sugar maple to California's giant sequoia. Stop at the Administration Building for a map and self-guided tour information. Prepare to do a lot of walking.

To reach the arboretum, take the Metro to bus B2. Get off on Bladensburg Rd at Rand St, which puts you a few blocks from the R St entrance. (There's another entrance on New York Ave NE, but R St is more convenient.)