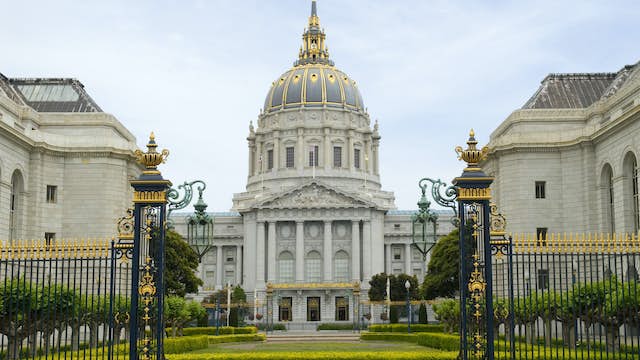 Designed in 1915 to outdo Paris for flair and outsize the capitol in Washington, DC, the world's fifth-largest dome was unsteady until its retrofit after the 1989 earthquake, when ingenious technology enabled it to swing on its base without raising alarm. The dome's gilded exterior is a cringe-worthy reminder of 1990s dot-com excess, when the city squandered a short-lived windfall on gold leafing – but at least its foundations are solid. Don't miss ground-floor public art exhibitions, which range from portraits of iconic LGBT performers to photographs from western railroad journeys.

Free docent-led tours meet at the tour kiosk near the Van Ness Ave entrance, but City Hall is best seen in action. For insight into how San Francisco government works – or doesn't – you can witness Board of Supervisors meetings on Tuesdays at 2pm in City Hall; check the agenda and video archives online. Theoretically, visitors may be removed for 'boisterous' behavior – but, this being San Francisco, democracy in action can get pretty rowdy without fazing security guards.