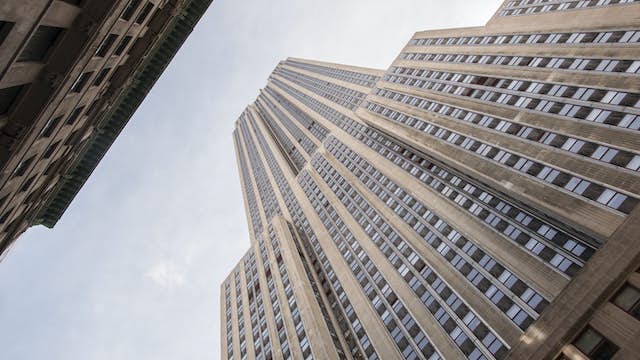 This 22-acre 'city within a city' debuted at the height of the Great Depression, with developer John D Rockefeller Jr footing the $100-million price tag. Taking nine years to build, it was America's first multiuse retail, entertainment and office space – a sprawl of 19 buildings (14 of which are the original moderne structures). The center was declared a National Landmark in 1987. Highlights include the Top of the Rock observation deck and NBC Studio Tours.

The Rockefeller Center is also graced with the creations of 30 great artists, commissioned around the punchy theme ‘Man at the Crossroads Looks Uncertainly but Hopefully at the Future.’ Paul Manship contributed the 18ft Prometheus, overlooking the sunken plaza, while Lee Lawrie made the 24ft-tall bronze Atlas, in front of the International Building (630 Fifth Ave). Isamu Noguchi's News sits above the entrance to the Associated Press Building (50 Rockefeller Plaza), while José Maria Sert's oil American Progress awaits in the lobby of central 30 Rockefeller Plaza (formerly known as the GE Building). The latter work replaced Mexican artist Diego Rivera's original painting, rejected by the Rockefellers for containing ‘communist imagery.’

Come the festive season, Rockefeller Plaza is where you'll find New York's most famous Christmas tree. Ceremoniously lit just after Thanksgiving, it's a tradition that dates back to the 1930s, when construction workers set up a small tree on the site. In its shadow, Rink at Rockefeller Center is the city's best-known – and smallest – ice-skating rink (which becomes a cafe in summer).