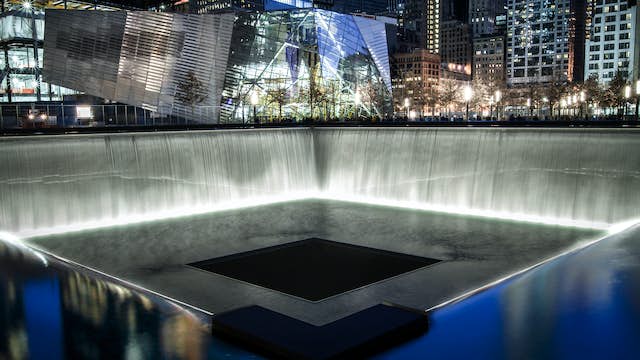 The focal point of the National September 11 Memorial is Reflecting Absence, two imposing reflecting pools that occupy the actual footprints of the ill-fated Twin Towers. From their rim, a steady cascade of water pours 30ft down toward a central void. Bronze panels frame the pools, inscribed with the names of the nearly 3000 people who died in the terrorist attacks of September 11, 2001, and in the World Trade Center car bombing on February 26, 1993.

To the west of the South Pool is the 'Survivor Tree,' a flourishing pear tree that miraculously survived the destruction, burnt and broken but resilient enough to be nursed back to health. Just beyond the memorial is the site's museum: poignant and deeply affecting, it tells the story of that tragic day and its impact on America and the world.