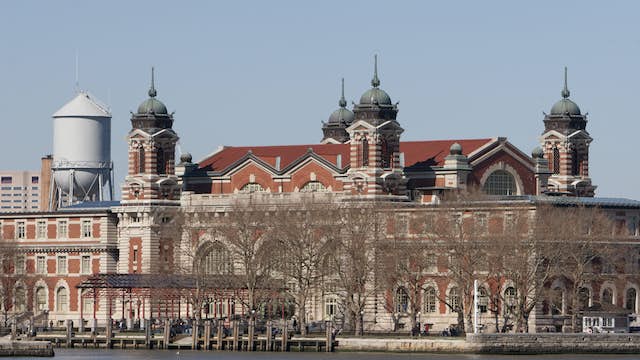 Located in New York Harbor, Ellis Island is the US's most famous and historically important gateway and is home to one of the country’s most moving museums. It pays tribute to the indelible courage of more than 12 million immigrants who passed through this processing station between 1892 and 1924, after journeys that often took weeks and were spent under difficult conditions.

More than 100 million living Americans are the descendants of these arrivals hoping to attain the American dream for themselves and their children. The Ellis Island National Museum of Immigration delivers a poignant tribute to their experiences. Housed inside the restored Main Building of the former immigration complex, you'll find narratives from historians, immigrants themselves and other sources that animate a fascinating collection of personal objects, official documents, photographs and film footage. Visitors keen to trace their ancestors’ details can avail of searchable historic records.

Ellis Island has featured in many movies, including The Godfather: Part II and Brooklyn and is part of the Statue of Liberty National Monument. It is only accessible to the public by ferry, and purchasing tickets online in advance can help to avoid long queues.

Ellis Island is named after one of its previous owners, Samuel Ellis, but was previously known as Little Oyster Island, while the original native Mohegan name for the island was "Kioshk," meaning "Gull Island.” Ellis Island was used by the military for much of the 19th century and house batteries and naval magazines.

Prior to 1890, individual states regulated immigration into the US, but around that time, rising political instability, economic distress and religious persecution in Europe fueled one of the largest mass human migration in history. The US Government decided to construct a new immigration station on Ellis Island, and opened its doors on January 1, 1892.

A teenage girl from Ireland called Annie Moore was the first immigrant to be processed there, accompanied by her two younger brothers. Over the next 62 years, more than 12 million immigrants arrived to the US via Ellis Island. First and second class passengers arriving by steamship in New York Harbor were not required to undergo the inspection process as they were considered 'affluent', but third class or steerage passengers or those with legal or health problems were sent to Ellis Island to be processed.

The inspections took place in the Registry Room (now known as the Great Hall) and they lasted several hours. As well as a legal inspection carried out with the help of interpreters, doctors scanned every individual for physical ailments and medical conditions. Only 2% of people were excluded from entry; reasons for denial included having a contagious disease or concerns they wouldn't find legal employment.

In 1897, a fire on Ellis Island burned the immigration station completely to the ground, and federal and state immigration records dating back to 1855 were lost. While ship manifests were burned, customs lists were kept in the US Customs Office and are available to view. A new fireproof facility was built after that and it opened in 1900.

As increased restrictions were introduced to limit the numbers entering the US, Ellis Island experienced a decline in usage from the early 1920s. US embassies were established all over the world and paperwork and medical inspections were completed there. By 1924, only war refugees, displaced persons needing assistance and those with problems with their paperwork were brought to Ellis Island for the inspection process. It served various purposes since, including being a World War II detention center for enemy merchants, until it was officially closed in 1954.

What to see at Ellis Island

The Ellis Island National Museum of Immigration is located in the Main Building, and it has exhibits, theaters, a gift shop, café and visitor facilities. When you arrive, stop in the museum lobby to pick up your free audioguide, which offers rich insights into the exhibits and is also available in a version aimed at children. Check at the Information Desk for guided tours, programs and the documentary film schedule.

The museum has three floors of exhibits documenting immigrants’ experiences at Ellis Island, as well as the general history of immigration to the US. If you're very short on time, consider focusing on the 2nd floor, where you'll find the two most fascinating exhibits.

The first, Through America's Gate, examines the step-by-step process faced by the newly arrived – including the chalk-marking of those suspected of illness, a wince-inducing eye examination, and 29 questions – in the beautiful, vaulted Registry Room. The second, Peak Immigration Years: 1880–1924, explores the motives behind the immigrants' journeys and the challenges they faced in beginning their new American lives.

For a history of the rise, fall and resurrection of the building itself, make time for the Restoring a Landmark exhibition on the 3rd floor; its tableaux of trashed desks, chairs and other abandoned possessions are strangely haunting. If you don't feel like carrying around an audioguide, you can always pick up one of the phones in each display area and listen to the affecting recorded memories of actual people who came through Ellis Island, taped in the 1980s.

Another option is the free 35-minute guided tour with a park ranger or volunteer, best booked in advance and also available in American Sign Language. For the complete experience, catch the 35-minute film, Island of Hope, Island of Tears, shown throughout the day in one of two theaters. And if you have ancestors who came through Ellis Island, you can look up their ship manifests and immigration records in the American Family Immigration History Center on the 1st floor and get them printed out for display for a fee.

The rest of Ellis Island’s buildings — the 1930s’ ferry building, hospital, morgue, contagious disease wards, offices, housing and maintenance facilities — can be viewed only on a guided tour that must be booked in advance.

Statue Cruises is the only ferry company authorized to provide tickets and transportation to Ellis Island. Ferry tickets can be purchased online here or by calling 1-877-LADY-TIX. They are also available at the Statue Cruises ticket booths in Castle Clinton in Battery Park in New York City or at the ferry departure point in Liberty State Park in New Jersey.

Ferry tickets for visitors aged 13-61 cost $23.50, children aged 4-12 pay $12 and senior tickets are $18. There are no additional costs to visit the National Museum of Immigration.

Hard Hat tours are open to visitors over the age of 13, and adult tickets cost €68.50, including the ferry trip. The tour offers a 90-minute guided tour of the unrestored hospital complex on the south side of Ellis Island, and includes the art exhibit Unframed – Ellis Island by French artist JR.