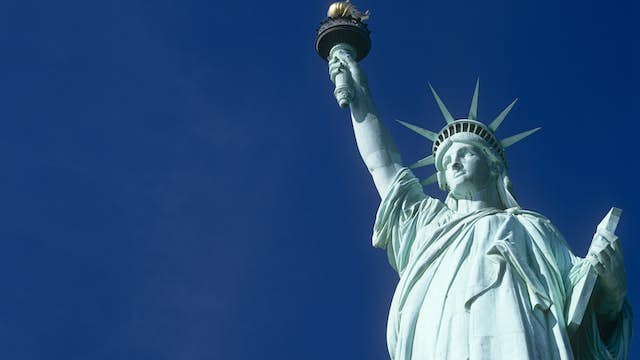 It’s been over a century since Lady Liberty made her debut appearance on the New York skyline, but this iconic statue is still one of the city’s most enduring symbols. First conceived in 1865 by French intellectual Édouard de Laboulaye as a monument to the republican principles shared by France and the USA, the Statue of Liberty remains a powerful symbol of the America’s founding ideals. For generations, migrants to America cruised past the statue on their way into New York harbour, and knew they had arrived in the land of freedom and opportunity.

Visiting the Statue of Liberty is not just a case of turning up on the day. The 151ft (93m) statue stands on its own 14.7 acre (6 hectare) island, southwest of Manhattan and close to the Jersey Shore. Access is by ferry from Battery Park, and most visitors visit on a loop that also takes in Ellis Island, where more than 12 million immigrants checked into the USA from 1892 to 1924. Both sights rank amongst the most popular things to do in New York so it pays to purchase tickets online in advance to avoid soul-crushingly long queues.

Experiencing the Statue of Liberty

On arrival at Liberty Island, your options will depend on the ticket you hold in your hand. Standard ferry tickets grant automatic access to the island grounds, so you can wander around at Lady Liberty’s feet and gaze up at her looming copper bulk. Tickets to climb the star-shaped pedestal are only slightly more expensive, but they are in heavy demand, and often book out months ahead. To climb up to Lady Liberty’s crown for breathtaking city and harbor views, you’ll need to book tickets up to six months in advance.

Assuming you gain access, the climb to the viewing gallery in the statue’s crown involves a steep ascent on 354 steps inside the superstructure. The interior of Lady Liberty is surprisingly crammed, with room for just a few visitors at a time in the crown itself, and this puts a strict limit on visitor numbers (hence the crunch for tickets). A second steep stairway climbs inside the statue’s raised arm to the torch, but sadly, access to the public has been prohibited since 1916. You’ll still get a pretty good view of the torch through the crown windows.

The statue's pedestal – build in the style of a bastion fort – also offers good harbour views, though not quite as impressive as from the crown. Liberty Island has various food options, all pretty dire, so bring a picnic lunch to eat on the lawn by the statue or on the sea wall in front of the harbour view.

The Statue of Liberty was really a French invention from the outset. Inspired by the triumph over slavery in the American Civil War, political philosopher Édouard de Laboulaye and sculptor Frédéric-Auguste Bartholdi first came up with the idea over dinner in 1865. After gaining approval from the New York authorities, the pair travelled to America to select a site in 1871. At various stages, the project also had input from Eugène Viollet-le-Duc, who restored Notre Dame cathedral in Paris, and Gustave Eiffel, who created the statue's internal steel supports.

Bringing the plan to fruition was a long, drawn-out process. Costs were covered by private donors from France (who paid for the statue) and America (covering the costs of the plinth) but funds ran short on several occasions. The torch-bearing arm was displayed in Philadelphia and Madison Square Park in New York to drum up public interest in 1876, and  the statue's head went on show at the Paris World’s Fair in 1878 to aid the French fundraising effort. Publisher Joseph Pulitzer launched a fundraising drive that eventually carried the project over the line, with small donations from some 120,000 contributors.

Known in full as Liberty Enlightening the World, the 151ft (93m) figure is a representation of the Greek deity Libertas, and the design was strongly influenced by the neoclassical sculpture of Ancient Greece and Rome. Bartholdi was obsessed with the Colossus of Rhodes, and he had already had one giant, torch-wielding statue project rejected by the Khedive of Egypt.

The statue was pieced together in kit form in Paris, using moulded copper plates just 2.4mm thick, fixed to an internal steel frame with flexible iron bars. The completed statue was shipped over to New York in pieces, and assembled on Liberty Island (then Bedloe's Island), opening to the public in 1886. The gilded torch you see today, however is not original; it was added in 1984 to replace the fragile original lantern, which was relocated to the lobby.

Reserve tickets online well in advance (up to six months ahead) to access Lady Liberty’s crown; pedestal tickets are slightly easier to get hold of, but the statue is still worth visiting on a general ticket, even if you don’t get to go inside. The ferry ticket to Liberty Island includes access to the grounds and guided ranger tours or self-guided audio tours. Book ferry tickets ahead to avoid long queues on the day.

The slog up tight, narrow steps to the statue's crown is arduous and should not be undertaken by anyone with significant health conditions that might impair their ability to complete the climb. You'll need a good four or five hours to explore both Ellis Island and Liberty Island properly.

Restaurants near the Statue of Liberty

With the poor dining options on the island, you’ll either want to bring a picnic (Financier Patisserie is good for baked goods), or eat in the Financial District before you take the ferry.