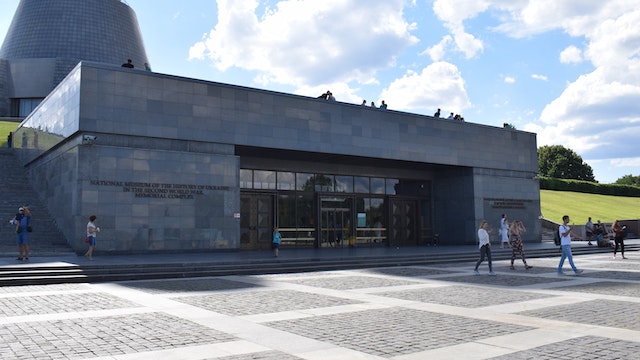 Located at the base of the towering Rodina Mat, this museum was built belatedly in 1981 to honour Kyiv's defenders during the Great Patriotic War (as WWII is known in these parts). While the focus is still on WWII, the huge foyer out front has been turned into a shrine of sorts to victims of the war in the east, with revolving exhibits telling the story of Ukraine's all-too-contemporary conflict with Russia.

Behind that, 12 giant halls walk the visitor through every nuance and stage of WWII, a war that killed more than 8 million Ukrainians. A walk through these halls is essential to understanding the tremendous suffering endured by Ukraine during the Nazi invasion and subsequent occupation. It's a sombre and sometimes even macabre exhibition, such as in Hall No. 6 where you find yourself looking at a pair of gloves made from human skin and soap made from human fat.

Displays are mainly in Ukrainian, but English placards summarise the highlights in each hall.

The museum was recently renamed the National Museum of the History of Ukraine in the Second World War; not surprisingly, the name has yet to catch on.