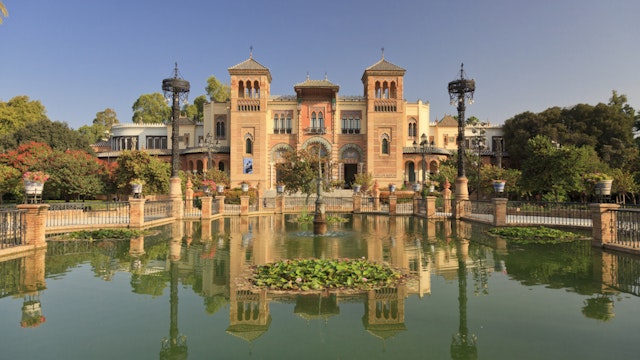 A glorious oasis of green, the 34-hectare Parque de María Luisa is the perfect place to escape the noise and heat of the city, with duck ponds, landscaped gardens and paths shaded by soaring trees. The land, formerly the estate of the Palacio de San Telmo, was donated to the city in the late 19th century and developed in the run-up to the 1929 Exposición Iberoamericana.

Amidst the lush gardens, the park contains several notable drawcards. Chief among them is Plaza de España, the most flamboyant of the building projects completed for the 1929 Expo. A vast brick-and-tile confection, it features fountains, mini-canals, and a series of gaudy tile pictures depicting historical scenes from each Spanish province. You can hire row boats to pootle around the plaza's canals for €6 (for 35 minutes).

In the south of the park, the Museo Arqueológico has some wonderful Roman sculptures, mosaics and statues – many gathered from the archaeological site of Itálica just outside Seville.

Opposite is the Museo de Artes y Costumbres Populares, dedicated to local customs, costumes and traditions.

The park is a great place for children to let off steam and families to bond over a bike ride – four-person quad bikes are available to hire for €14 per half-hour.