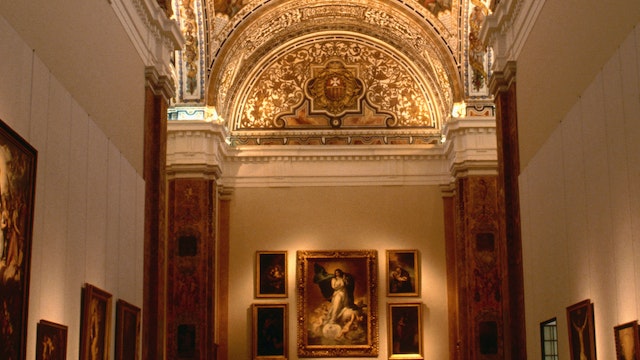 Housed in a grand Mannerist palace, the former Convento de la Merced, the Museo de Bellas Artes is one of Spain's premier art museums. Its collection of Spanish and Sevillan paintings and sculptures comprises works from the 15th to 20th centuries, but the focus is very much on brooding religious paintings from the city's 17th-century Siglo de Oro (Golden Age).

Works are displayed in chronological order, with the Golden Age masterpieces clustered in salas V to X. The most visually arresting room is the convent's former church (sala V), hung with paintings by masters of the Sevillan baroque, above all Murillo. His Inmaculada concepción (aka La Colosal; 1650) at the head of the church displays all the curving, twisting movement so central to baroque art. Other artists represented include Pacheco (teacher and father-in-law of Velázquez), Juan de Valdés Leal, Zurbarán (look for his deeply sombre Cristo crucificado, c 1630–35) and sculptor Juan Martínez Montañés.

For a change of subject matter, push on to sala XII where Gonzalo Bilbao’s Las cigarreras (The Cigarette Makers; 1915) is one of several canvases depicting scenes of Sevillan life.