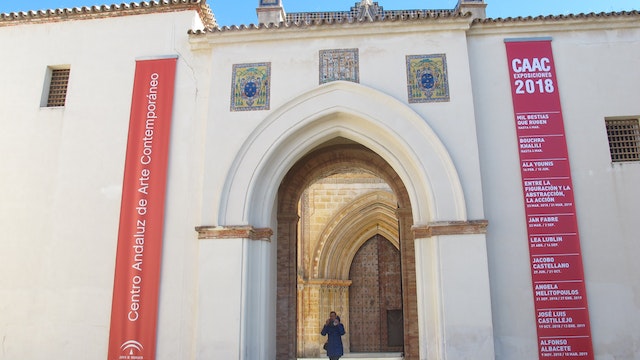 Contemporary art goes hand in hand with 15th-century architecture at the Centro Andaluz de Arte Contemporáneo. The centre, sensitively housed in the Monasterio de Santa María de Las Cuevas, hosts temporary exhibitions by Andalucian and international artists alongside some truly bizarre permanent pieces. Look out for Alicia by Cristina Lucas, a massive head and arm poking through two windows that was supposedly inspired by Alice in Wonderland. Elsewhere, several brick kilns testify to the monastery's past as a 19th-century ceramics factory.

The Monasterio de Santa María de Las Cuevas, commonly known as the Monasterio de la Cartuja, or more simply La Cartuja, was founded in 1400. It later became a favourite Sevillan lodging place for Christopher Columbus, who prayed in its chapel before his voyage to the Americas and whose remains lay here from his death in 1506 to 1537.

In 1839, the complex was bought by an enterprising Englishman, Charles Pickman, who turned it into a porcelain factory – hence, the bottle-shaped kilns rising rather incongruously in the claustrón (large cloister). The factory ceased production in the 1980s and, following a restoration, served as the Royal Pavilion during the 1992 Expo.