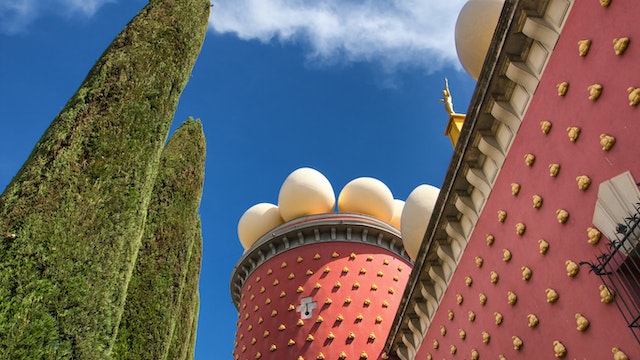 The first name that pops into your head when you lay eyes on this red castle-like building, topped with giant eggs and stylised Oscar-like statues and studded with plaster-covered croissants, is Salvador Dalí. An entirely appropriate final resting place for the master of surrealism, it has assured his immortality. Exhibits range from enormous, impossible-to-miss installations – like Taxi Plujós (Rainy Taxi), an early Cadillac surmounted by statues – to the more discreet, including a tiny, mysterious room with a mirrored flamingo.

‘Theatre-museum’ is an apt label for this trip through the incredibly fertile imagination of one of the great showmen of the 20th century. Between 1961 and 1974, Dalí converted Figueres’ former municipal theatre, destroyed by a fire in 1939 at the end of the civil war, into the Teatre-Museu Dalí. It’s full of illusions, tricks and the utterly unexpected, and contains a substantial portion of Dalí’s life’s work, though you won’t find his most famous pieces here (they're scattered around the world).

Even outside, the building aims to surprise, from its entrance watched over by medieval suits of armour balancing baguettes on their heads, to bizarre sculptures outside the entrance on Plaça de Gala i Salvador Dalí, to the pink walls along Pujada al Castell and Carrer Canigó. The Torre Galatea, added in 1983, is where Dalí spent his final years.

Opening the show is Taxi Plujós; put a coin in the slot and water washes all over the occupant of the car. The Sala de Peixateries (Fishmongers' Hall) holds a collection of Dalí oils, including the famous Autoretrat Tou amb Tall de Bacon Fregit (Soft Self-Portrait with Fried Bacon) and Retrat de Picasso (Portrait of Picasso). Beneath the former stage of the theatre is the crypt with Dalí’s plain tomb, located at what Dalí modestly described as the spiritual centre of Europe.

After you’ve seen the more notorious pieces, such as climbing the stairs in the famous Mae West Room, see if you can track down a turtle with a gold coin balanced on its back, peepholes into a green-lit room where a mirrored flamingo stands amid fake plants, and Dalí's heavenly reimagining of the Sistine Chapel in the Palau del Vent (Palace of the Wind Room).

Gala, Dalí’s wife and lifelong muse, is seen throughout – from the Gala Nua Mirant el Mar Mediterrani (Gala Nude Looking at the Mediterranean Sea) on the 2nd level, which also appears to be a portrait of Abraham Lincoln from afar (best seen from outside the Mae West room), to the classic Leda Atòmica (Atomic Leda).

A separate entrance (same ticket and opening times) leads into Dalí Joies, a collection of 37 Dalí-designed jewels. Designed between 1941 and 1970, the jewellery was made by specialists in New York. Each piece, ranging from the disconcerting Ull del Temps (Eye of Time) to the Elefant de l'Espai (Space Elephant) and the Cor Reial (Royal Heart), is unique.