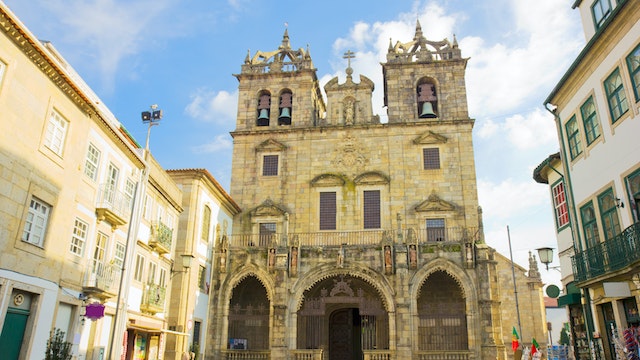 Braga’s extraordinary cathedral, the oldest in Portugal, was begun when the archdiocese was restored in 1070 and completed in the following century. It’s a rambling complex made up of differing styles, and architecture buffs could spend half a day happily distinguishing the Romanesque bones from Manueline musculature and baroque frippery.

The original Romanesque style is the most interesting and survives in the cathedral’s overall shape, the southern entrance and the marvellous west portal, which is carved with scenes from the medieval legend of Reynard the Fox (now sheltered inside a Gothic porch). The most appealing external features are the filigree Manueline towers and roof – an early work by João de Castilho, who went on to build Lisbon’s Mosteiro dos Jerónimos.

You can enter the cathedral through the west portal or via a courtyard and cloister that’s lined with Gothic chapels on the north side. The church itself features a fine Manueline carved altarpiece, a tall chapel with azulejos telling the story of Braga’s first bishop, and fantastic twin baroque organs (held up by formidable satyrs and mermen), which are played at mass every Sunday at 11.30am.

Connected to the church is the modern treasury museum, housing a goldmine of ecclesiastical booty, including the lovely Nossa Senhora do Leite of the Virgin suckling Christ, attributed to 16th-century French sculptor Nicolas Chanterène. Other highlights are the iron cross that was used in 1500 to celebrate the very first Mass in Brazil.

To visit the upper choir and outlying chapels, visitors must purchase a separate ticket and join a guided tour (some guides speak English). Follow your guide up the stone staircase for an up-close look at the mesmerising organs and gilded choir stalls, then continue downstairs into the cathedral’s showpiece Capela dos Reis (Kings’ Chapel), home to the tombs of Henri of Burgundy and Dona Teresa, parents of the first king of Portugal, Afonso Henriques. You’ll also visit the azulejo-covered Capela de São Geraldo (dating from the 12th century but reworked over the years) and the 14th-century Capela da Glória, whose interior was painted in unrepentantly Moorish geometric motifs in the 16th century.