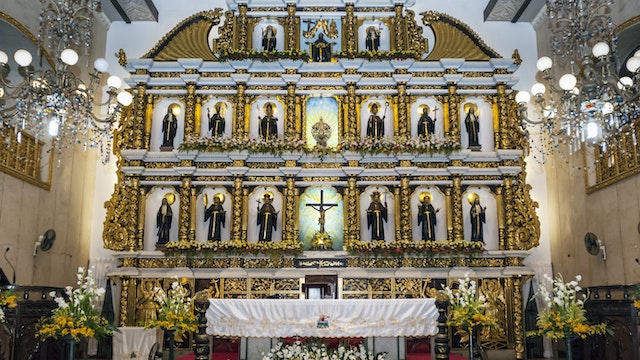 Cebu's holiest church houses a revered Flemish statuette of the Christ child (Santo Niño) that dates to Magellan's time. The church is no stranger to hardship: established in 1565 (the first church in the Philippines), three earlier structures were destroyed by fire, before the existing baroque structure was built in 1737. Its facade and belfry were badly damaged by the 2013 earthquake but have been restored.

Perhaps the church owes its incendiary past to the perennial bonfire of candles in its courtyard, stoked by an endless procession of pilgrims and other worshippers. The object of their veneration is an image of the infant Jesus, sequestered in a chapel to the left of the altar. It dates back to Magellan's time and is said to be miraculous (which it probably had to be to survive all those fires). Every year, the image is the centrepiece of Cebu's largest annual event, the Sinulog Festival.

On Sundays and Fridays, the street outside the church is closed to vehicular traffic, all-day outdoor masses are held and the basilica turns into a sea of pilgrims, water sellers and replica Santo Niño salespeople.