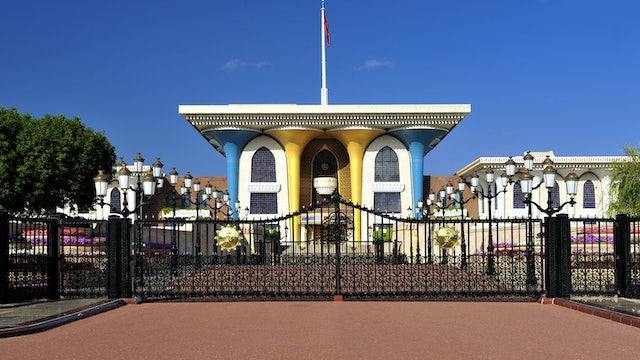 If you stand by the harbour wall on Mirani St, the building to the right with the delightful mushroom pillars in blue and gold is the Sultan’s Palace. On the inland side, an avenue of palm trees leads to a roundabout surrounded by grand royal court buildings and the new National Museum. Although the palace is closed to the public, you can pause in front of the gates, at the end of the colonnaded approach, for a quintessential Muscat selfie.

The palace was built over the site of the former British embassy where there used to be the stump of a flagpole in the grounds: the story goes that any slave (Oman was infamous for its slave trade from East Africa) who touched the flagpole was granted freedom. The palace today is largely used for ceremonial purposes as Sultan Qaboos favours a quieter, seaside residence near Seeb.