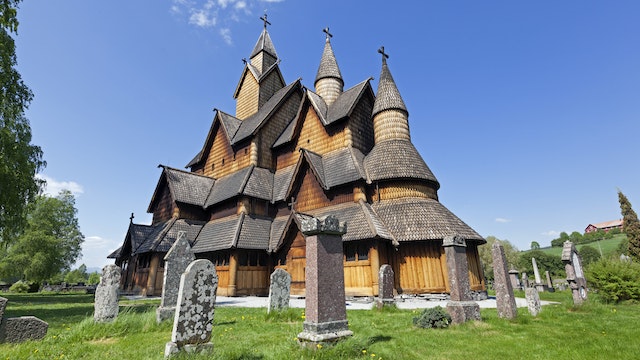 This fairy-tale church is the largest and one of the most beautiful of Norway's 28 remaining stave churches. As always, it's constructed around Norwegian pine support pillars, 12 large ones and six smaller ones, all topped by fearsome visages – and has four carved entrance portals. Of special interest are the lovely 1668 'rose' paintings on the walls, a runic inscription in the outer passageway and the 'Bishop's chair', which was made of an old pillar in the 17th century.

Its ornate carvings relate the pagan tale of the Viking Sigurd the Dragon-slayer, which has been reworked into a Christian parable involving Jesus Christ and the devil. The church is dated to 1242, but parts of the chancel are from as early as 1147 (it was heavily restored in the 1950s). The altarpiece originally dates from 1667 but was restored in 1908, and the exterior bell tower was added in 1850.

From Notodden, bus 301 goes right by; otherwise take any bus heading for Seljord or Bondal. You could also walk from town in half an hour, along the busy road and past slowly rusting factories on the way. Note that the church is sometimes closed for weddings.