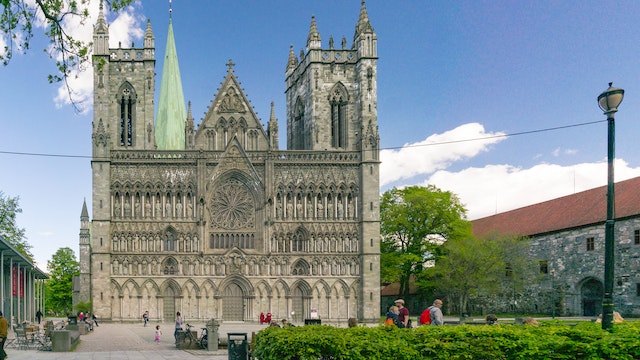 Nidaros Cathedral is Scandinavia's largest medieval building, and the northernmost Gothic structure in Europe. Outside, the ornately embellished, altar-like west wall has top-to-bottom statues of biblical characters and Norwegian bishops and kings, sculpted in the early 20th century. Several are copies of medieval originals, nowadays housed in the adjacent museum. Note the glowing, vibrant colours of the modern stained glass in the rose window at the west end in striking contrast to the interior gloom. Photography not permitted.

The altar sits over the original grave of St Olav, the Viking king who replaced the pagan Nordic religion with Christianity. The original stone cathedral was built in 1153, when Norway became a separate archbishopric. The current transept and chapter house were constructed in 1130–80 and reveal Anglo-Norman influences (many of the craftspeople were brought in from England), while the Gothic choir and ambulatory were completed in the early 14th century. The nave, repeatedly ravaged by fire across the centuries, is mostly a faithful 19th-century reconstruction.

Down in the crypt is a display of medieval carved tombstones (the majority restored from fragments since many headstones were broken up and carted away to be recycled in domestic buildings). Look for one inscribed in English and dedicated to William Miller, Shipmaster, of Dundee, Scotland, who met his end near Trondheim in the 18th century.

You can wander around freely but, between early June and early August, it's worth joining a tour (a 15-minute canter or a more detailed 45-minute visit). Times vary but there are up to four daily in English. Music-lovers may want to time their visit to take in a recital on the church's magnificent (and recently restored) organ.

From mid-June to mid-August you can climb the 172 steps up the cathedral's tower (50kr) for a great view over the city, but bear in mind that the staircase is extremely narrow and steep – and there's literally no turning back past fellow tour-goers once you're on your way. There are guided ascents every half-hour from its base in the south transept, with a limit of 20 people per ascent.