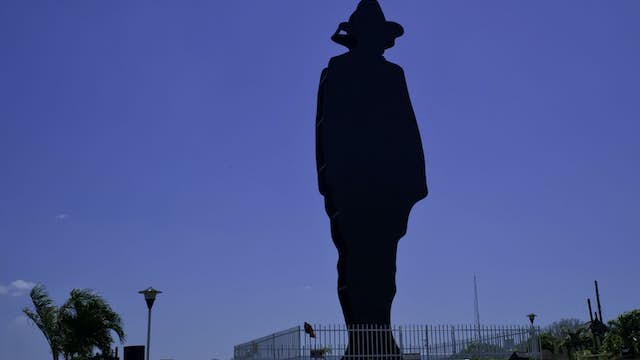 Home to what’s easily Managua’s most recognizable landmark, Sandino’s somber silhouette, this national historic park was once the site of the Casa Presidencial, where Sandino and his men were executed in 1934; what looks like a dilapidated parking structure was for decades one of Nicaragua’s most notorious prisons.

You can see Sandino, hastily erected by the departing Frente Sandinista de Liberación Nacional (FSLN; Sandinista National Liberation Front) government after its electoral loss in 1990, from almost anywhere in town; begin your ascent at the Crowne Plaza. You’ll pass Monumento Roosevelt, constructed in 1939, with lovely lake views (today it's a memorial to those killed in the revolution).

The top of Loma de Tiscapa is actually the lip of Volcán Tiscapa’s beautiful little crater lake, with incredible views of the city, both cathedrals and Volcán Momotombo. Keep in mind that, despite a vigorous clean-up campaign, the lake is polluted with untreated sewage.