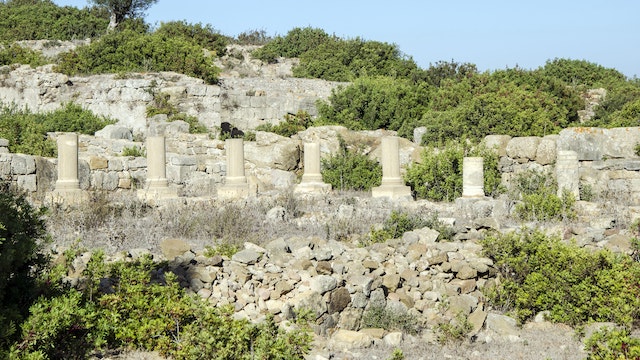 Set on a hill with spectacular views over the Loukos Estuary, the Carthaginian and Roman ruins of Lixus are evocative reminders that settlements on this coast are among the oldest in the country. And while it lacks the grandeur of Volubilis – much of the ruins have been eroded by time and the elements – you’ll be able to wander without the crowds. And now there’s a contemporary visitor centre with a fascinating display charting what’s known of the site’s history.

Megalithic stones found in the vicinity point to it originally being inhabited by a sun-worshipping people well versed in astronomy and mathematics. Then little is known until the Phoenicians set up the colony Liks here in about 1000 BCE. According to Pliny the Elder, it was here that Hercules picked the golden apples of the Garden of the Hesperides, thus completing the penultimate of his 12 labours. The golden apples could well have been Moroccan tangerines.

If a guardian is available, they’ll be happy to show you around – a tip (around Dh100) is appreciated. Immediately inside the gate is the lower town, with the remains of garum factories where fish was salted and the paste so beloved by the Romans was produced. A track leads up the hill to the acropolis, passing a steep amphitheatre built by the Romans along the way. Baths were originally built into the side of the amphitheatre, with some traces of mosaic flooring. Some mosaics from the site were removed and are now on display at the Archaeology Museum in Tetouan.

The path continues to the overgrown acropolis, which straddles the crest of the hill. From here you can look out over the Loukos Estuary and salt fields below. The civic buildings (including temple sanctuaries) and original city ramparts are here, as are traces of pre-Roman structures.

In the 6th century BCE, the Phoenician Atlantic colonies fell to the Carthaginians. Lixus remained a trading post, principally in gold, ivory and slaves and, by 42 CE, had entered the Roman Empire. Its primary exports soon changed to salt, olives, wine and garum, and its merchants also grew rich from the export of wild animals for use in the Empire’s amphitheatres.

The colony at Lixus rapidly declined as the Romans withdrew from North Africa, and was abandoned completely in the 5th century, after the collapse of the Roman Empire. Later, the site became known to Muslims as Tuchummus.

Lixus is approximately 5.5km north of Larache on the road to Tangier and the main gate is just off the highway, by the road running in front of the estuary. A petit taxi costs Dh20 one-way, but you may have trouble flagging down a bus or taxi for your return trip; it's best to organise for the driver to pick you up at an agreed time.