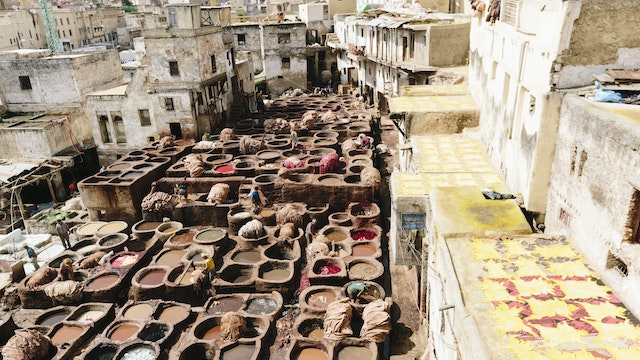 The largest of the medina's several tanneries, Chouara is one of the city’s most iconic sights (and smells). Operating since at least the 16th century, the area was heavily renovated in 2016, but the scene, viewed from the surrounding balconies, remains remarkably medieval. It's striking to see the hard physical labour that goes into the butter-soft, elegant leather goods sold in the surrounding workshops. Try to get here in the morning when the pits are awash with coloured dye.

The only way to see the tanneries in action is by walking through one of the leather shops, each of which has a terrace with a different vantage point. The easiest to find on your own is No. 10 on Derb Chouara (a metal sign juts into the street above the doorway); inside, though, the shop is an almost comical maze, and the better of the two terraces is to the north, via the babouche (leather slipper) room. If you're feeling more intrepid, head for the shop known as No. 64, which gives a good view from the north side of the tanneries; keep going north on Derb Chouara, then turn right, heading downhill. The second right leads to the shop.

Salespeople will happily give an explanation of the processes involved and will expect a small tip in return or, even better, a sale. While this might feel a little commercialised, you probably won’t find a better selection of leather in Morocco, and prices, although they start high to capitalise on tour groups, are very negotiable. The leather shops are in league with the tannery workers and many of the salesmen are relatives of those doing the hard graft below.

Heading east or northeast from Place As Seffarine, you’ll soon pick up the unmistakable waft of skin and dye, and 'helpful' touts will start steering you towards their preferred shops. Avoid them if you can; if you arrive with one in tow, your bargaining power is diluted, as you'll have to cover the tout's commission.