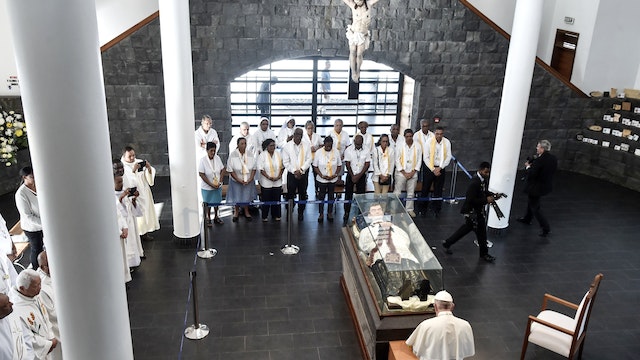 The shrine of French Catholic priest and missionary Père Jacques-Désiré Laval is something of a Lourdes of the Indian Ocean, with many miracles attributed to pilgrimages here. The padre died in 1864 and was beatified in 1979 during a visit by Pope John Paul II. Père Laval is credited with converting 67,000 people to Christianity during his 23 years in Mauritius. To get here, take a bus signed 'Cité La Cure' or 'Père Laval' from the Immigration Square bus station.

Père Laval is a popular figure with Mauritians of all religions. Pilgrims come from as far afield as South Africa, Britain and France to commemorate the anniversary of his death on 9 September. Notice the coloured plaster effigy of the priest on top of the tomb – it's been rubbed smooth by miracle-seeking pilgrims.

At other times of year the shrine is fairly quiet, though the services held on Friday at 1pm and 5pm attract a reasonable crowd. In the same complex is a large, modern church and a shop with a permanent exhibition of Père Laval's robe, mitre, letters and photographs.