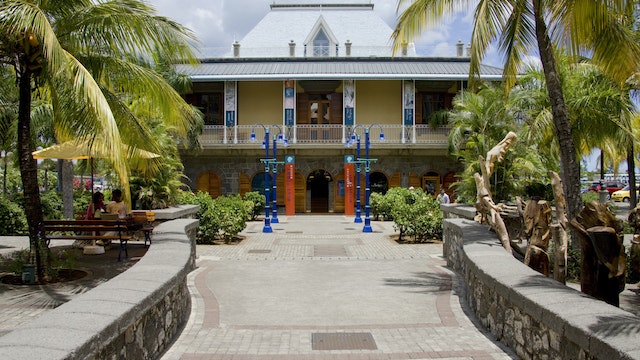 Although dedicated to the world-famous Mauritian one-penny and two-pence stamps of 1847, the Blue Penny Museum is far more wide-ranging than its name suggests, taking in the history of the island's exploration, settlement and colonial period, and even detouring into the Paul and Virginie story. It's Port Louis' best museum, one that give visitors a then-and-now look at the city, although travellers with mobility issues should know that the stamps are on the 1st floor and there’s no lift.

Central to the museum's collection are two of the world's rarest stamps: the red one-penny and blue two-pence 'Post Office' stamps issued in 1847. To preserve the colours, they are only lit up for 10 minutes at a time: every hour, at 20 minutes past the hour. The stamps are considered a national treasure and are probably the most valuable objects on the entire island.

On the ground floor you'll see a fantastic selection of antique maps, engravings from different periods in history, and photographs, as well as the country's most famous work of art: a superbly lifelike statue by Mauritian sculptor Prosper d'Épinay, carved in 1884. Based on Bernardin de St-Pierre's novel Paul et Virginie, the sculpture depicts the young hero carrying his sweetheart across a raging torrent.