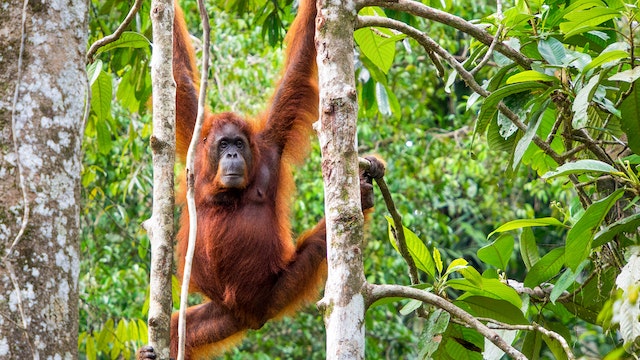 One of the best places in the world to see semiwild orangutans in their natural rainforest habitat, swinging from trees and scurrying up vines, Semenggoh Wildlife Centre is home to 28 orangutans who often (literally) swing by park HQ to dine on bananas and coconuts. There’s no guarantee that orangutans will show up, but even when there's plenty of fruit in the forest (November to February) the chances are excellent.

Hour-long feedings are held in the rainforest a few hundred metres from park HQ. When the sessions look as though they're over, rangers sometimes try to shoo visitors away (especially groups, whose guides are in any case eager to get back to Kuching), but orangutans often turn up at park HQ, so don’t rush off straight away if everything seems quiet.

For safety reasons, visitors are asked to stay at least 5m from the orangutans – who can be unpredictable – and are advised to keep a tight grip on their backpacks, water bottles and cameras because orangutans have been known to snatch things in search of something yummy. To avoid annoying – or even angering – the orangutans, do not point at them with anything that looks like a gun (such as a walking stick or camera tripod); do not scream or make sudden moves; and, when you take pictures, do not use a flash.

Rangers keep an eye out and radio back with news of the approach of Semenggoh's dominant male orangutan, Ritchie, who is easily recognised by his cheek flanges. If he decides to stop by, his food must be ready for him when he arrives to avoid provoking his wrath.

Semenggoh has two trails that pass through primary rainforest: the Masing Trail (Main Trail; red trail markings; 30 minutes), which links the HQ with the highway; and the Brooke’s Pool Trail (yellow and red trail markings), a 2km loop from HQ, but they are not normally open to the public because it is important to limit the orangutans' contact with humans.