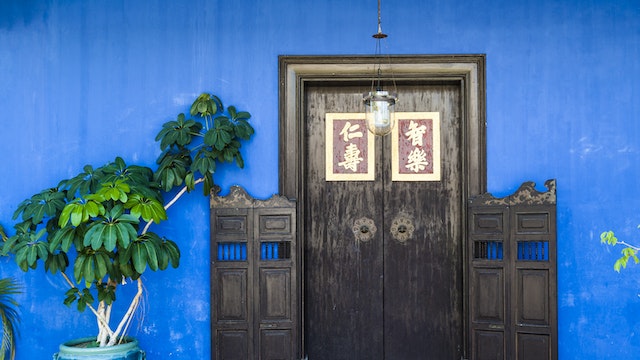 The most photographed building in George Town, this magnificent 38-room, 220-window mansion was built in the 1880s and rescued from ruin in the 1990s. Today a lavish, antique-filled hotel, its distinctive blue-hued exterior is the result of an indigo-based limewash. Slightly theatrical hour-long guided tours (included in the admission fee) explain the building's feng shui and unique features, and relate stories about Cheong Fatt Tze, the rags-to-riches Hakka merchant-trader who commissioned the mansion for his seventh (and favourite) wife.

Cheong Fatt Tze left China as a penniless teenager and eventually established a vast financial empire throughout East Asia, earning himself the dual sobriquets 'Rockefeller of the East' and the 'Last Mandarin'. Yet despite this, his lavish home was a faded shell within a few years of his death in 1916, rented out at penny rates to extended Chinese families.

A six-year restoration returned the mansion to its original glory, an eclectic fusion of Eastern and Western architectural styles, blending Chinese porcelain tile-work with art nouveau stained glass and British encaustic floor tiles. It's the finest surviving example of the eclectic architectural style preferred by wealthy Straits Chinese. Appropriately, the mansion had a cameo in the 2018 blockbuster Crazy Rich Asians.

To enjoy the regal mansion after the crowds leave, consider staying overnight.