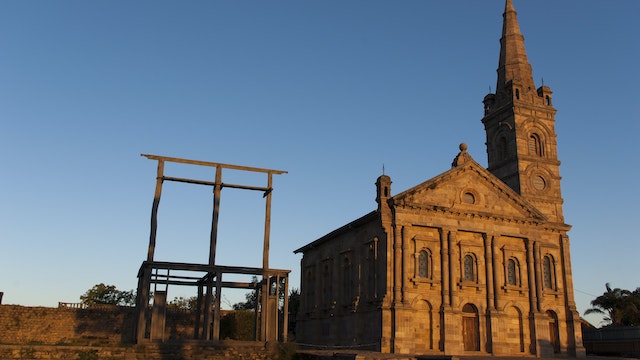 Tana’s rova (fortified palace), known as Manjakamiadana (A Fine Place to Rule), is the imposing structure that crowns the city's highest hill. Gutted in a fire in 1995, it remains under endless restoration but the compound can be visited. The palace was designed for Queen Ranavalona I by Scottish missionary James Cameron. The outer stone structure was added in 1867 for Queen Ranavalona II, although the roof and interior remained wooden, much to everyone's regret in 1995…

The palace gate is protected by a carved eagle, the symbol of military force, and a phallus, the symbol of circumcision and thus nobility. Succeeding rulers built (and destroyed) a number of other palaces on the premises; there are ruins scattered about. There is also a replica of King Andrianampoinimerina’s palace at Ambohimanga.

The Rova is the resting place of the country’s greatest monarchs: the most imposing stone tombs are located left of the main gate. The plain grey ones are those of kings, while the queens’ are painted red (red was the colour of nobility).

Remember that it is fady (taboo) to point your finger directly at the royal tombs or the palace itself. The Rova, which can be seen from almost anywhere in Tana, is at the very top of Haute-Ville, with wonderful views from the grounds.

Despite what they tell you at the gate, a guide is not compulsory.