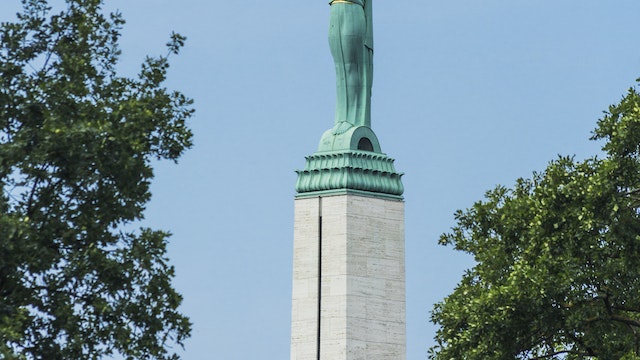 Affectionately known as ‘Milda’, Rīga’s Freedom Monument towers above the city between Old and Central Rīga. Paid for by public donations, the monument was designed by Kārlis Zāle and erected in 1935 where a statue of Russian ruler Peter the Great once stood.

At the base of the monument there is an inscription that reads ‘Tēvzemei un Brīvībai’ (For Fatherland and Freedom), accompanied by granite friezes of Latvians singing and fighting for their freedom. Among the figurines, you may recognise that of Lāčplēsis – the half-man, half-bear who symbolises Latvians' struggle for independence.

A copper female Liberty tops the soaring monument, holding three gold stars in her hands ('Milda' was once a common girls' name in Latvia, hence the monument's moniker). The three stars represent the three original cultural regions of Latvia: Kurzeme, Vidzeme and Latgale (Latvia’s fourth cultural region, Zemgale, is dismissed as a part of Kurzeme).

Surprisingly, during the Soviet years the Freedom Monument was never demolished. It helped that one of its authors, Ernests Štālbergs, designed Rīga's main Lenin statue, which stood further up Brivibas until it was removed in 1991. However, all through the Soviet period, Milda was strictly off limits to Latvians, and people trying to place flowers at the base were persecuted.

Two soldiers stand guard at the monument throughout the day and perform a modest changing of the guards every hour on the hour from 9am to 6pm.