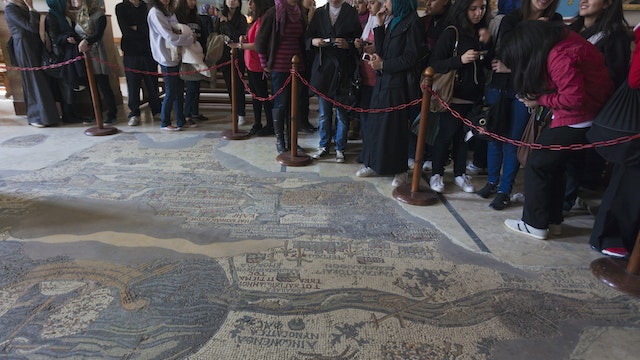 This rather modest 19th-century Greek Orthodox church houses a treasure of early Christianity. Imagine the excitement in 1884 when Christian builders came across the remnants of a Byzantine church on their construction site. Among the rubble, having survived wilful destruction, fire and neglect, the flooring they discovered wasn’t just another mosaic but one with extraordinary significance: to this day, it represents the oldest map of Palestine in existence and provides many historical insights into the region.

Crafted in AD 560, the map has 157 captions (in Greek) depicting all the major biblical sites of the Middle East, from Egypt to Palestine. It was originally around 15m to 25m long and 6m wide, and once contained more than two million pieces. Although much of the mosaic has been lost, enough remains to sense the complexity of the whole.

On Friday and Sunday mornings the church opens at 7am for Mass (visitors are welcome); viewing the map at these times is not permitted. A small shop by the exit sells copies of the map and reproduction Orthodox icons.

The ticket office doubles as a small interpretative centre, and has excellent displays recounting the history of the mosaics and the church – it's well worth spending some time here before viewing the map, as it will make it easier to spot the details that you want to focus on in the church.