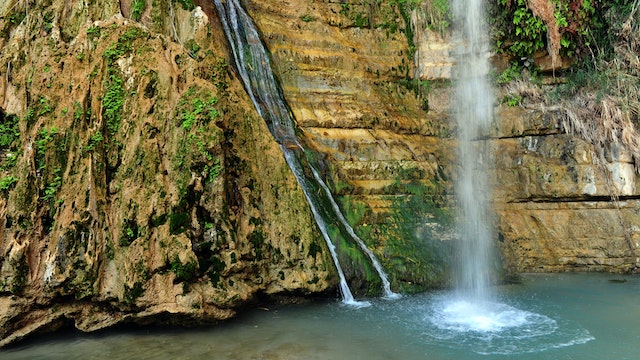 This reserve consists of two roughly parallel canyons, Wadi David and Wadi Arugot, each of which has its own entrance complex and ticket office. It is also home to an ancient synagogue.

When you buy your ticket, you receive a colour-coded map-brochure that has invaluable details on the area’s trails (indicated using the same colours as the trail markings), how long each route takes, and the times by which you need to begin each circuit to finish by closing time.

Park rangers make sure that visitors do not enter the park before it opens or stick around after closing time (they can fine violators 365NIS). The reason: desert animals such as the wolf, jackal and fox need some people-less peace and quiet to search for food and drink (the reserve has the only year-round water sources in the entire area).

The last time a critically endangered Arabian leopard (Panthera pardus nimr) was spotted in the Ein Gedi area – carrying off Kibbutz Ein Gedi house pets for dinner – was in 2006. The species is now presumed to be extinct here.

Eating, smoking and pets are not allowed in the reserve.