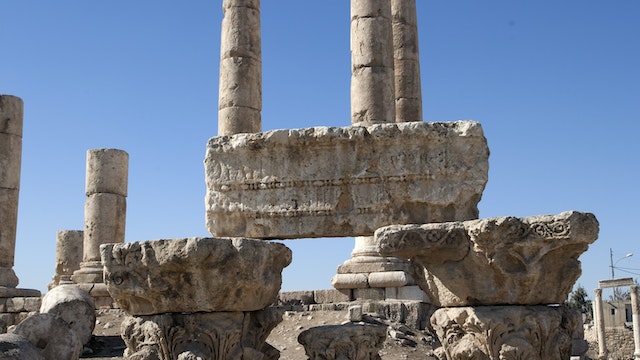 The area known as the Citadel sits on the highest hill in Amman, Jebel Al Qala’a (about 850m above sea level), and is the site of ancient Rabbath-Ammon. Occupied since the Bronze Age, it's surrounded by a 1700m-long wall, which was rebuilt many times during the Bronze and Iron Ages, as well as the Roman, Byzantine and Umayyad periods. There's plenty to see, but the Citadel's most striking sights are the Temple of Hercules and the Ummayad Palace.

Artefacts dating from the Bronze Age show that the hill was a fortress and/or agora (open space for commerce and politics) for thousands of years.

The two giant standing pillars are the remains of the Roman Temple of Hercules. Once connected to the Forum (downtown), the temple was built during the reign of Roman Emperor Marcus Aurelius (AD 161–80). The only obvious remains are parts of the podium and the columns, which are visible from around town. There’s also a rather touching remnant of a stone-carved hand, which shows the level of detail that would have adorned the temple in its glory days. Nearby is a lookout with sweeping views of the downtown area.

The Citadel’s most impressive series of historic buildings is focused around the Umayyad Palace, behind the small (and rather old-fashioned) archaeological museum. Believed to be the work of Umayyad Arabs and dating from about AD 720, the palace was an extensive complex of royal and residential buildings and was once home to the governor of Amman. Its lifespan was short – it was destroyed by an earthquake in AD 749 and was never fully rebuilt.

Coming from the south, the first major building belonging to the palace complex is the domed audience hall, designed to impress visitors to the royal palace. The most intact of the buildings on the site, the hall is shaped like a cross, mirroring the Byzantine church over which it was built. After much debate as to whether the central space had originally been covered or left open to the elements, consensus came down on the side of the ceiling dome, which was reconstructed by Spanish archaeologists.

A courtyard immediately north of the hall leads to a 10m-wide colonnaded street, lined with numerous arches and columns, and flanked by residential and administrative buildings. Further to the north is the former governor’s residence, which includes the throne room.

East of the audience hall is the Umayyad Cistern, an enormous circular hole with steps leading down to the bottom, which once supplied water to the palace and surrounding areas. The small disc on the floor in the centre once supported a pillar that was used for measuring water levels.

Near the museum to the south is the small Byzantine Basilica, most of which has been destroyed by earthquakes. It dates from the 6th or 7th century AD, and contains a few dusty mosaics.

The Citadel ticket office is on the road leading up to the Citadel’s entrance. Multilingual, fully licensed guides (up to JD15 per hour) usually congregate near the ticket office and can really enhance your visit.

The only access roads to the Citadel are from Al Malek Ali Bin Al Hussein St. It’s better to hire a taxi for the trip up (around JD1 from downtown) and save some energy for the recommended walk down. Steps lead from east of the Citadel complex, past a viewing platform to Hashemi St, opposite the Roman Theatre. This makes a fine start to a walking tour of downtown.