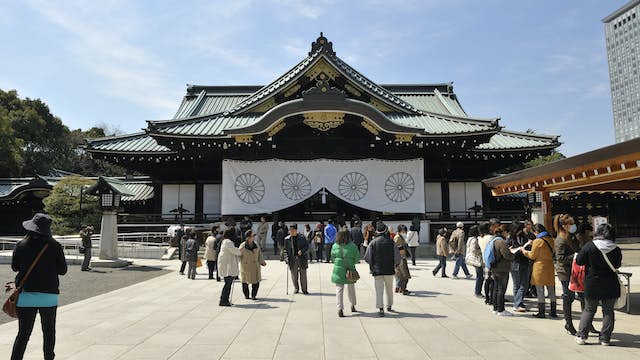 Literally ‘For the Peace of the Country Shrine’, Yasukuni is the memorial shrine to Japan’s war dead, around 2.5 million souls. First built in 1869, it is a peaceful and green place but also incredibly controversial: in 1979, 14 class-A war criminals, including WWII general Hideki Tōjō, were enshrined here.

The main approach is fronted by a 25m-tall torii (entrance gate) made of steel and bronze; behind the main shrine, seek out the serene grove of mossy trees and the ornamental pond.

For politicians, a visit to Yasukuni, particularly on 15 August, the anniversary of Japan’s defeat in WWII, is considered a political statement. It's a move that pleases hawkish constituents but also one that draws a strong rebuke from Japan's Asian neighbours, who suffered greatly in Japan's wars of expansion during the 20th century.