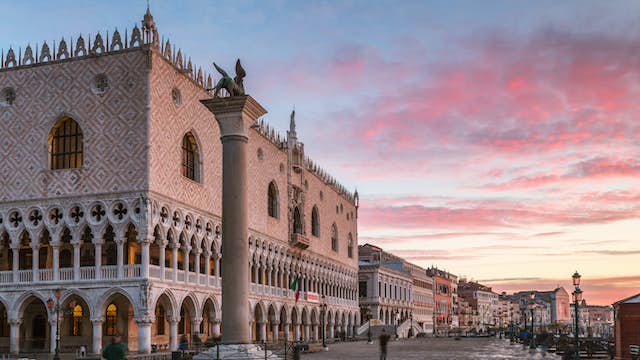 Holding pride of place on the waterfront, this pretty Gothic confection may be an unlikely setting for the political and administrative seat of a great republic, but it's an exquisitely Venetian one. Beyond its dainty colonnades and geometrically patterned facade of white Istrian stone and pale pink Veronese marble lie grand rooms of state, the doge's private apartments and a large complex of council chambers, courts and prisons.

The doge's official residence probably moved to this site in the 10th century, although the current complex only started to take shape around 1340. In 1424 the wing facing the piazzetta was added and the palace assumed its final form, give or take a few major fires and refurbishments.

A standard ticket allows you access to the grand central courtyard, a display of historic masonry (Museo dell'Opera) on the ground floor and a circuit of the main part of the palace that leads through the state rooms, armoury, prisons and institutional rooms. The Doge's Apartments are now used for temporary art exhibitions, which are ticketed separately (around €10 extra). Further rooms, too small for the masses, can be visited on the 75-minute Secret Itineraries Tour.

The most impressive parts of the palace are at the top. Ascend Sansovino’s 24-carat gilt stucco-work Scala d’Oro (Golden Staircase) and emerge into rooms covered with gorgeous propaganda. In the Palladio-designed Sala delle Quattro Porte (Hall of the Four Doors), ambassadors awaited ducal audiences under a lavish display of Venice's virtues by Giovanni Cambi, Titian and Tiepolo.

Few were granted an audience in the Palladio-designed Collegio (Council Room), where Veronese’s 1575–78 Virtues of the Republic ceiling shows Venice as a bewitching blonde figure waving her sceptre like a wand over Justice and Peace. Father-son team Jacopo and Domenico Tintoretto attempt similar flattery, showing Venice keeping company with Apollo, Mars and Mercury in their Triumph of Venice ceiling for the Sala del Senato (Senate Hall).

Government cover-ups were never so appealing as in the Sala Consiglio dei Dieci (Chamber of the Council of Ten), where Venice’s star chamber plotted beneath Veronese’s Juno Bestowing Her Gifts on Venice, depicting a glowing goddess strewing gold ducats. Above the slot where anonymous treason accusations were slipped into the Sala della Bussola (Compass Room) is his St Mark in Glory ceiling.