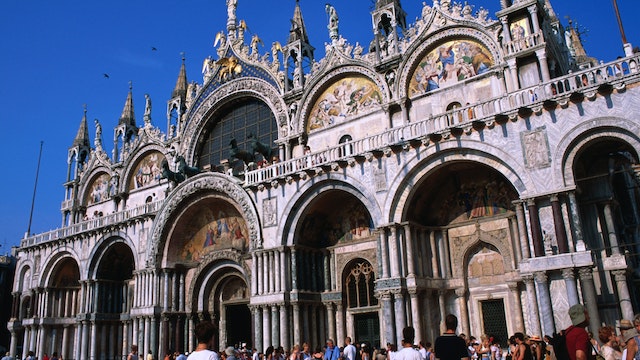 With a profusion of domes and more than 8000 sq metres of luminous mosaics, Venice's cathedral is unforgettable. It was founded in the 9th century to house the corpse of St Mark after wily Venetian merchants smuggled it out of Egypt in a barrel of pork fat. When the original building burnt down in 932 Venice rebuilt the basilica in its own cosmopolitan image, with Byzantine domes, a Greek cross layout and walls clad in marble from Syria, Egypt and Palestine.

Unbelievably, this sumptuous church was the doge's private chapel. It only officially became Venice's cathedral in 1807 following the demise of the Republic, replacing the considerably less grand Basilica di San Pietro in Castello.

The front of St Mark's ripples and crests like a wave, its five niched portals capped with shimmering mosaics and frothy stonework arches. It's especially resplendent just before sunset, when the sun's dying rays set the golden mosaics ablaze. The oldest mosaic on the facade, dating from 1270, is in the lunette above the far-left portal, depicting St Mark’s stolen body arriving at the basilica. The theme is echoed in three of the other lunettes, including the 1660 mosaics above the second portal from the right, showing turbaned officials recoiling from the hamper of pork fat containing the sainted corpse. Grand entrances are made through the central portal, under an ornate triple arch featuring Egyptian purple porphyry columns and intricate 13th- to 14th-century stone reliefs.

Blinking is natural upon your first glimpse of the basilica's glittering ceiling mosaics, many made with 24-carat gold leaf fused onto the back of the glass to represent divine light. Just inside the vestibule are the basilica's oldest mosaics: Apostles with the Madonna, standing sentry by the main door for more than 950 years. Inside the church proper, three golden domes vie for your attention. The images are intended to be read from the altar end to the entry, so the first dome you see is actually the last: the Pentecost Cupola, with the Holy Spirit represented by a dove shooting tongues of flame onto the heads of the surrounding saints. In the central 13th-century Ascension Cupola, angels swirl around the central figure of Christ hovering among the stars.

The Cupola of the Prophets is best seen from behind the main altar, which houses the simple sarcophagus containing St Mark's body. But the main reason visitors pay €2 to enter this space is to see the stupendous Pala d’Oro, a gold altarpiece studded with 2000 emeralds, amethysts, sapphires, rubies, pearls and other gemstones. The screen's most priceless treasures, however, are biblical figures in vibrant cloisonné, begun in Constantinople in AD 976 and embellished by Venetian goldsmiths in 1209. The enamelled saints have wild, unkempt beards and wide eyes fixed on Jesus.

Other holy bones and booty from the Crusades fill the Tesoro (treasury; admission €3) and there are more treasures on show in the museum upstairs, accessed from the vestibule. A highlight is the Quadriga of St Mark's (also known as the Triumphal Quadriga), a group of four bronze horses plundered from Constantinople and later carted off to Paris by Napoleon before being returned to the basilica. The originals are now kept inside, but a door leads out to where they were originally placed on the Loggia dei Cavalli, where reproductions of the horses gallop off the balcony over Piazza San Marco.

There's no charge to enter the church and wander around the roped-off central circuit, although between April and October you can purchase 'Skip the Line' tickets for €3 (children under 5 enter free of charge). You'll need to dress modestly (ie knees and shoulders covered) and leave large bags around the corner at the Ateneo San Basso Left Luggage Office. Those simply wishing to pray or attend Mass can enter from the Porta dei Fiori, on the north side of the church.