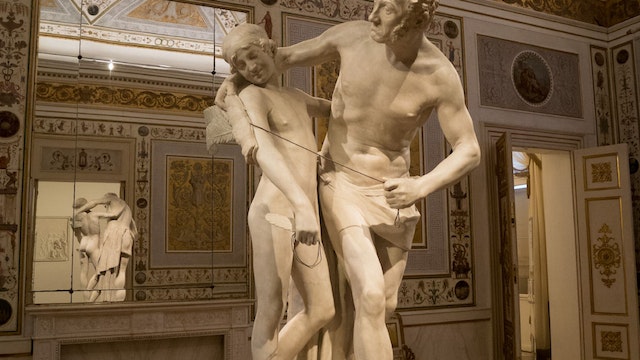 Napoleon pulled down an ancient church to build his royal digs over Piazza San Marco, and then filled them with the riches of the doges while taking some of Venice's finest heirlooms to France as trophies. When he lost Venice to the Austrians, Empress Sissi remodelled the palace, adding ceiling frescoes, silk cladding and brocade curtains. It's now open to the public and full of many of Venice's reclaimed treasures, including ancient maps, statues, cameos and four centuries of artistic masterpieces.

Napoleon's wing links the 16th-century Procuratie Vecchie on the northern side of the square to the Procuratie Nuove on the south. The latter, described by Palladio as the most sumptuous palace ever built, is incorporated into the museum. It includes the magnificent Biblioteca Nazionale Marciana, a large library designed by Jacopo Sansovino in the 16th century and covered with frescoes by Veronese, Titian and Tintoretto featuring larger-than-life philosophers and miniature back-flipping sea creatures. Adjoining it is the collection of the Museo Archeologico Nazionale, featuring an extraordinary array of ancient sculpture, much of which was bequeathed to the city in 1523 by Cardinal Domenico Grimani. Also on this floor, look out for Jacopo di Barbari's minutely detailed woodblock perspective view of Venice and Antonio Canova's 1776 statues of star-crossed lovers Orpheus and Eurydice.