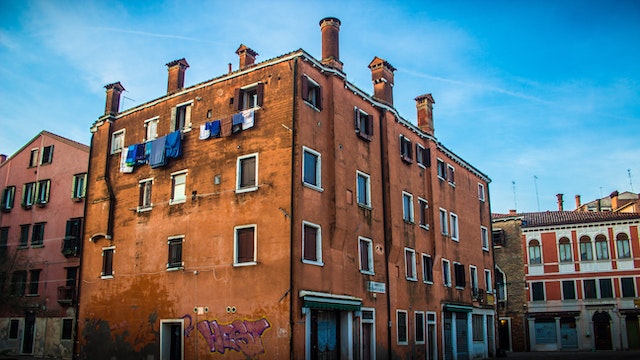 In medieval times this part of Cannaregio housed a getto (foundry), but it was as the designated Jewish quarter from the 16th to 19th centuries that the word acquired a whole new meaning. In accordance with the Venetian Republic’s 1516 decree, by day Jewish lenders, doctors and clothing merchants were permitted to attend to Venice's commercial interests, but at night and on Christian holidays they were locked within the gated island of the Ghetto Nuovo (New Foundry).

When Jewish merchants fled the Spanish Inquisition for Venice in 1541, there was no place left in the Ghetto to go but up: in buildings around the Campo del Ghetto Nuovo, upper storeys housed new arrivals, synagogues and publishing houses. A plain wooden cupola in the corner of the campo (square) marks the location of the Schola Canton. Next door is the Schola Tedesca, while the rooftop Schola Italiana is a simple synagogue built by newly arrived and largely destitute Italian Jews, who had fled from Spanish-controlled southern Italy.

As numbers grew, the Ghetto was extended into the neighbouring Ghetto Vecchio (Old Foundry), creating the confusing situation where the older Jewish area is called the New Ghetto and the newer is the Old Ghetto. Sephardic Jewish refugees raised two synagogues in Campo del Ghetto Vecchio that are considered among the most beautiful in northern Italy, lavishly rebuilt in the 17th century. The Schola Levantina, founded in 1541, has a magnificent 17th-century woodworked pulpit, while the Schola Spagnola, founded around 1580, shows just how Venetian the community had become through a demonstrated flair for Venetian architectural flourishes: repeating geometric details, high-arched windows, and exuberant marble and carved-wood baroque interiors.

After Venice fell to Napoleon in 1787 the city's Jews experienced six months of freedom before the Austrian administration restricted them to the Ghetto once again. It wasn't until Venice joined with Italy in 1866 that full emancipation was gained, but even that was short-lived. Many of Venice's Jews fled before the Nazi occupation, but 246 were arrested and sent to concentration camps between 1943 and 1944; only eight survived. A memorial consisting of harrowing bas-reliefs and the names and ages of those killed now lines two walls facing Campo del Ghetto Nuovo.

You can stroll around this peaceful precinct by day and night, but the best way to experience the Ghetto is on a guided tour of three of the synagogues offered by the Museo Ebraico, departing hourly from 10.30am.