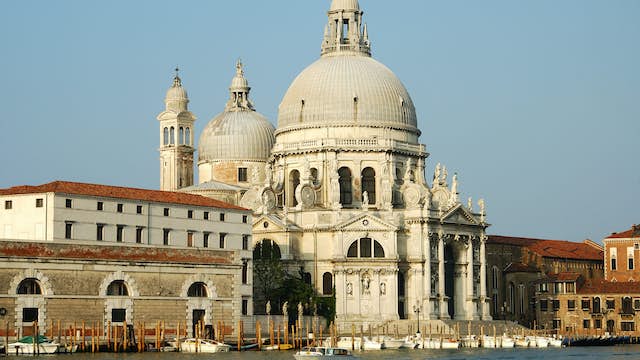 Baldassare Longhena's magnificent basilica is prominently positioned near the entrance to the Grand Canal, its white stones, exuberant statuary and high domes gleaming spectacularly under the sun. The church makes good on an official appeal by the Venetian Senate directly to the Madonna in 1630, after 80,000 Venetians had been killed by plague. The Senate promised the Madonna a church in exchange for her intervention on behalf of Venice – no expense or effort spared.

Before 'La Salute' could even be started, at least 100,000 pylons had to be driven deep into the barene (mudbanks) to shore up the tip of Dorsoduro. The Madonna provided essential inspiration, but La Salute draws its structural strength from a range of architectural and spiritual traditions. Architectural scholars note striking similarities between Longhena's unusual domed octagonal structure and both Greco-Roman goddess temples and Jewish Kabbalah diagrams. The lines of the building converge beneath the dome to form a vortex on the inlaid marble floors; some believe the black dot at the centre radiates healing energy.

The basilica's interior is flooded with light filtered through disks of pale-tinted glass encircling the implausibly high dome. The main focus of devotion is the elaborately carved baroque high altar, with a 12th-century Cretan icon of the Madonna of Good Health set into it. A side altar near the entrance to the sacristy showcases The Descent of the Holy Spirit (1546) by Titian.

Entry to the church is free, but there is a charge to visit the art-slung sacristy (closed on Sunday mornings). The sacristy is a wonder within a wonder, its glorious collection of Titian masterpieces including moody ceiling frescoes, a vivid self-portrait in the guise of St Matthew, and his earliest known work, Saint Mark Enthroned with Sts Cosmas, Damian, Roch & Sebastian (1510). Salute's most charming allegory for Venice's miraculous survival of the plague is Palma il Giovane's painting of Jonah emerging from the mouth of the whale, where the survivor stomps down the creature's tongue like an action hero walking the red carpet. Life in a time of plague is a miracle worth celebrating in Tintoretto’s upbeat Wedding Feast of Cana (1561), featuring a Venetian throng of multicultural musicians, busy wine pourers and Tintoretto himself, depicted with a long beard near the bottom left of the canvas.