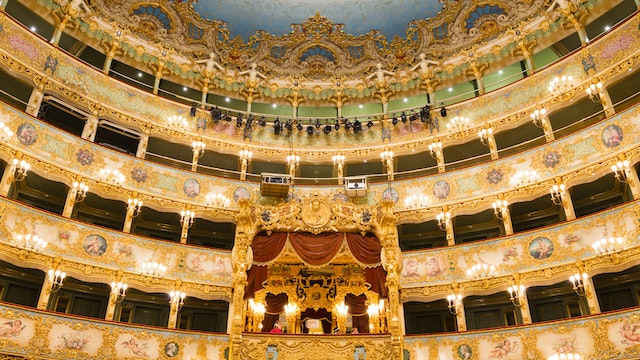 Once its dominion over the high seas ended, Venice discovered the power of the high Cs, opening La Fenice in 1792. Rossini, Donizetti and Bellini staged operas here; Verdi premiered Rigoletto and La Traviata; and international greats Stravinsky, Prokofiev and Britten composed for the house, making La Fenice the envy of Europe. From January to July and September to October, opera season is in full swing. If you can't attend a performance, it's possible to explore the theatre with an audio guide (adult/reduced €11/7).

The name La Fenice (The Phoenix) is a reference to an earlier opera house that burnt down in 1774. History was to repeat itself in 1836 and again in 1996, when the beautiful gilt-encrusted theatre was reduced to ashes in a mysterious blaze. Two electricians, apparently behind on repairs, were found guilty of arson. Venice without La Fenice was unthinkable and worldwide donations poured in, enabling the construction of a €90-million replica, which reopened in late 2003. Some critics had lobbied for an avant-garde design by Gae Aulenti, but regardless, the reprise performance of La Traviata was a sensation.