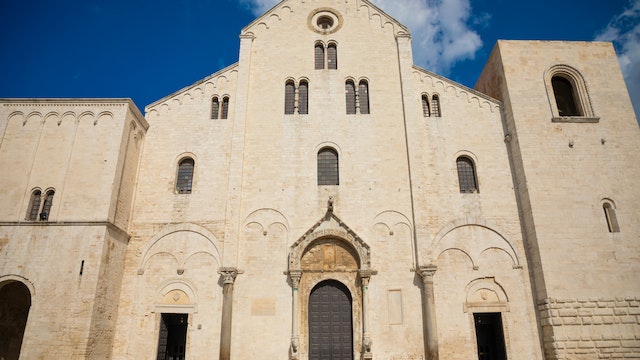 Bari's signature basilica was one of the first Norman churches to be built in southern Italy, and is a splendid (if square and solid) example of Pugliese-Romanesque architecture. Dating to the 12th century, it was originally constructed to house the relics of St Nicholas (better known as Father Christmas), which were stolen from Turkey in 1087 by local fishing folk. Today, it is an important place of pilgrimage for both Catholics and Orthodox Christians.

St Nicholas' remains, which are said to emanate a miraculous myrrh with special powers, are ensconced in a shrine in the beautiful, vaulted crypt. Above, the interior is huge and simple with a gilded 17th-century wooden ceiling. The magnificent 13th-century ciborium over the altar is Puglia's oldest. Other items related to the basilica, including chalices, vestments and crests, are displayed in the Museo Nicolaiano, adjacent.