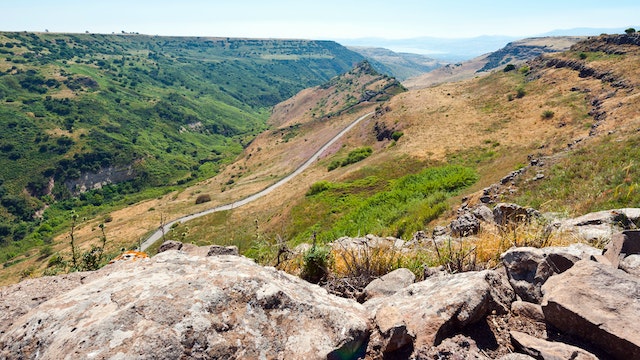 The site of a thriving Jewish village during the late Second Temple period, Gamla dared to defy the Romans during the Great Jewish Revolt (66–70 CE) and as a result was besieged by Vespasian’s legions. Today, you can visit the ruins, which afford spectacular views of the surrounding countryside. From park HQ, walking down to, and around, ancient Gamla takes two to three hours.

Historian Josephus Flavius recorded the Romans' seven-month siege (67 CE), the defenders’ valiant stand and the bloody final battle, and reported a Masada-like mass suicide of thousands of Jews (for which there's no archaeological evidence). After Gamla – perched atop a rocky ridge shaped like a camel’s back (gamla is the Aramaic word for camel) – was identified in 1968 based on Flavius’ precise descriptions, excavations unearthed an enormous quantity of Roman siege weaponry (some can be seen in Katzrin’s Golan Archaeological Museum) as well as one of the world’s oldest synagogues, believed to date from the 1st century BCE (ie from the time of the Second Temple).

Gamla is known for the Griffon vultures (with an astonishing wingspan of 2.7m) that nest in the reserve's cliffs and soar majestically over the valley below. Sadly, they are becoming rarer, victims of high-voltage electrical lines, quadcopters and poisoned carrion that a tiny minority of ranchers set out – illegally – to kill wolves and jackals. Fifteen years ago there were some 200 on the Golan; today only about 15 survive. To help the local population recover, Griffon vultures from Spain have been brought here and released. Half-hour talks on the birds (in Hebrew) generally begin daily at 11am and 1pm at the Vulture Lookout.

A remarkable 51m-high waterfall can be seen from the Waterfall Overlook (Tatzpit HaMapal); the trail to get there (1½ hours return) passes a field dotted with dolmens (basalt grave markers) erected by nomads 4000 years ago.

On the plateau around the parking lot, the wheelchair-accessible Vulture Path (Shvil HaNesharim; 20 to 30 minutes) affords a fine panorama of the ancient city.

Gamla is 20km south of Katzrin.