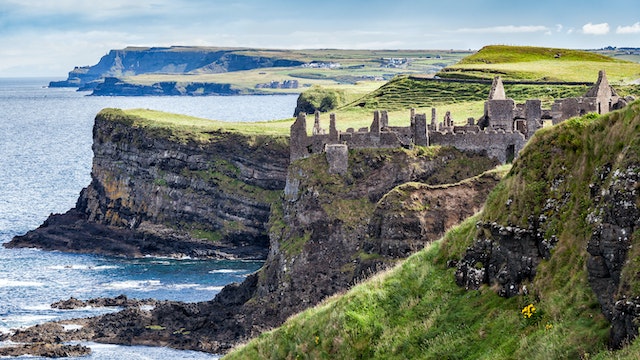 This medieval castle ruin is perched on top of a dramatic cliffside overlooking the glorious Causeway Coast.

With steep drops on either side, the remains of Dunluce Castle are straight from a fantasy epic; it was the filming location of the Greyjoys’ dilapidated Pyke Castle in Game of Thrones. A narrow bridge leads from the former guest lodgings and stables on the mainland across a dizzying gap to the main part of the fortress. Below the castle, a path leads down from the gatehouse to the Mermaid's Cave.

The castle lies between Portballintrae and Portrush and can be reached by Portrush along a 5km coastal path. It’s a six-minute drive to Old Bushmills Distillery.

There is evidence of settlements on this outcrop from the first millennium, presumably helped by its very defensible position. The ruins left there now date from the 16th and 17th century when the castle became the seat of Clan McDonnell, who displaced their rivals the McQuillans.

The McDonnells had ties to Scotland’s Stewart kings and later pledged allegiance to England’s Queen Elizabeth I. In the early 17th century, a town was built adjacent to the castle. It was destroyed by fire more than 50 years later but, upon its rediscovery in 2011, is thought to be one of the most advanced towns of its time, even featuring indoor toilets.

The McDonnells’ fortunes dissipated after the Battle of the Boyne in 1690 and the castle began to fall into disrepair. At some point in the 18th century, the north wall of the castle collapsed into the sea. The site continued to be passed down throughout the centuries however, eventually coming into the part-ownership of Winston Churchill through marriage. He signed his share over to the Northern Ireland government in 1928 and since then the site has been maintained and conserved by the state.

The scene of several tumultuous feuds, there are plenty of ghost stories associated with the castle. It is even said to have its own resident banshee, the ghost of Maeve Roe, daughter of Lord McQuillan. She refused to marry her father’s choice of husband because she was in love with another man and was locked into the eastern tower as punishment. Rescued by her true love on a stormy night, the pair escaped to a small boat stored in Mermaid’s Cave but drowned in the wild waves. Her body was never recovered but local legend says her cries can be heard on similarly stormy nights and her ghost can be seen in the tower looking out to sea.

Open seven days a week, the entrance fee of £5.50 per adult (£3.50 per child) gets you some spectacular views of the castle and plenty of historical exhibits inside detailing the long and fascinating history of the site. Some of the castle interiors are not wheelchair accessible and there are cobblestones to navigate in some areas.