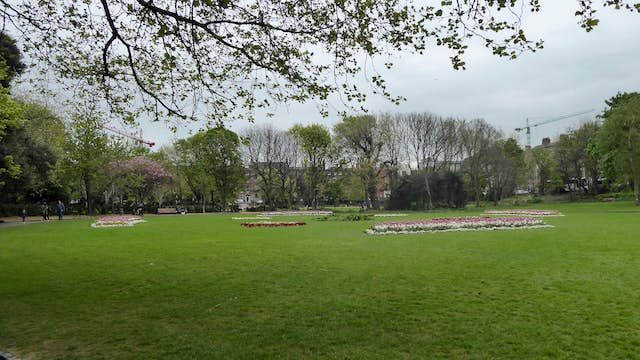 Merrion Sq is the most prestigious and, arguably, the most elegant of Dublin's Georgian squares. Its well-kept lawns and tended flower beds are flanked on three sides by gorgeous Georgian houses with colourful doors, peacock fanlights, ornate door knockers and, occasionally, foot-scrapers, used to remove mud from shoes. Over the past two centuries they've been used by some notable residents.

The square, laid out in 1762, is bordered on its fourth side by the National Gallery and Leinster House – all of which, apparently, isn’t enough for some. One former resident, WB Yeats (1865–1939), was less than impressed and described the architecture as ‘grey 18th century’; there’s just no pleasing some people.

Just inside the northwestern corner of the square is a colourful statue of Oscar Wilde.