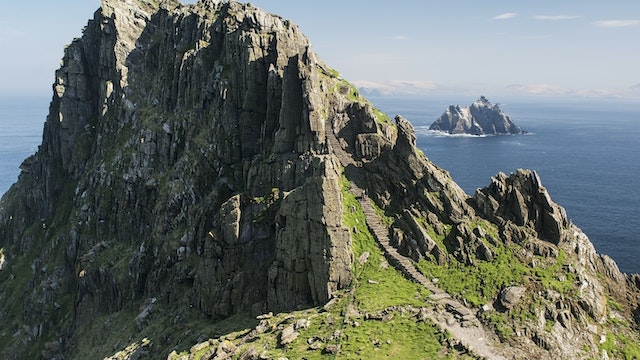 The jagged, 217m-high rock of Skellig Michael (Michael's Rock; like St Michael's Mount in Cornwall and Mont St Michel in Normandy) is the larger of the two Skellig Islands and a Unesco World Heritage site. Early Christian monks established a community and survived here from the 6th until the 12th or 13th century. The monastic buildings perch on a saddle in the rock, some 150m above sea level, reached by 618 steep steps cut into the rock face.

The astounding 6th-century oratories and beehive cells vary in size; the largest cell has a floor space of 4.5m by 3.6m. You can see the monks' south-facing vegetable garden and their cistern for collecting rainwater. The most impressive structural achievements are the settlement's foundations – platforms built on the steep slope using nothing more than earth and drystone walls.

Influenced by the Coptic Church (founded by St Anthony in the deserts of Egypt and Libya), the monks' determined quest for ultimate solitude led them to this remote, windblown edge of Europe. Not much is known about the life of the monastery, but there are records of Viking raids in AD 812 and 823. Monks were kidnapped or killed, but the community recovered and carried on. In the 11th century a rectangular oratory was added to the site, but although it was expanded in the 12th century, the monks abandoned the rock around this time.

After the introduction of the Gregorian calendar in 1582, Skellig Michael became a popular spot for weddings. Marriages were forbidden during Lent, but since Skellig used the old Julian calendar, a trip to the islands allowed those unable to wait for Easter to tie the knot. In the 1820s two lighthouses were built on the island, together with the road that runs around the base.

There are no toilets on the island.