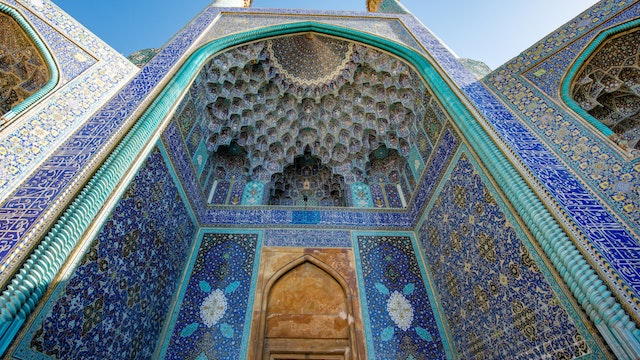 The Jameh complex is a veritable museum of Islamic architecture while still functioning as a busy place of worship. Showcasing the best that nine centuries of artistic and religious endeavour has achieved, from the geometric elegance of the Seljuks to the more florid refinements of the Safavid era, a visit repays time spent examining the details – a finely carved column, delicate mosaics, perfect brickwork. Covering more than 20,000 sq metres, this is the biggest mosque in Iran.

Religious activity on this site is believed to date back to the Sassanid Zoroastrians, with the first sizeable mosque being built over temple foundations by the Seljuks in the 11th century. The two large domes (north and south) have survived intact from this era but the rest of the mosque was destroyed by fire in the 12th century and rebuilt in 1121. Embellishments were added throughout the centuries.

In the centre of the main courtyard, which is surrounded by four contrasting iwans, is an ablutions fountain designed to imitate the Kaaba at Mecca. Would-be pilgrims once used the fountain to practise the appropriate rituals prior to undertaking the hajj. The two-storey porches around the courtyard’s perimeter were constructed in the late 15th century.

The south iwan is highly elaborate, with Mongol-era stalactite mouldings, some splendid 15th-century mosaics on the side walls and two minarets. Behind it is the grand Nezam al-Molk Dome, which is flanked by Seljuk-era prayer halls.

The north iwan is noteworthy for its monumental porch with the Seljuks’ customary Kufic inscriptions and austere brick pillars in the sanctuary. Behind it (entered through a door next to the iwan) is a prayer hall featuring a forest of pillars. The bricks of each of these pillars is decorated with the craftsman's signature trademark. At the rear of the north iwan is the exquisite Taj al-Molk Dome, widely considered to be the finest brick dome in Persia. While relatively small, it is said to be mathematically perfect, and has survived dozens of earthquakes without a blemish for more than 900 years.

The west iwan was originally built by the Seljuks but later decorated by the Safavids. The mosaics are more geometric in style here than those of the southern hall. The courtyard is topped by a maazeneh, a small raised platform with a conical roof from where the faithful used to be called to prayer.

The Room of Sultan Uljeitu (a 14th-century Shiite convert) next to the west iwan is home to one of the mosque’s greatest treasures – an exquisite stucco mihrab with dense Quranic inscriptions and floral designs. Next to this is the Timurid-era Winter Hall (Beit al-Shata), built in 1448 and lit by alabaster skylights.