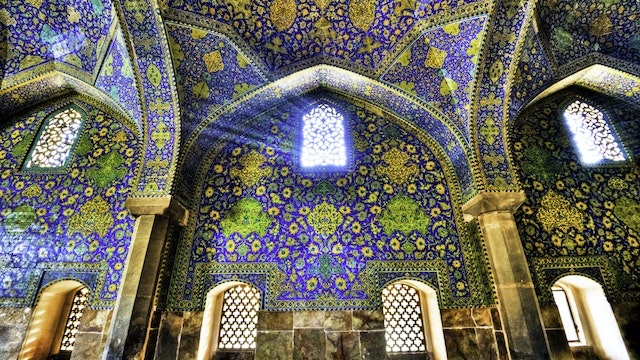 This elegant mosque, with its iconic blue-tiled mosaics and its perfect proportions, forms a visually stunning monument at the head of Esfahan's main square. Unblemished since its construction 400 years ago, it stands as a monument to the vision of Shah Abbas I and the accomplishments of the Safavid dynasty. The mosque's crowning dome was completed in 1629, the last year of the reign of Shah Abbas.

Although each of the mosque’s parts is a masterpiece, it is the unity of the overall design that leaves a lasting impression, and the positioning of the much-photographed entrance portal is a case in point as it has more to do with its location on the square than with the mosque’s spiritual aims. The portal's function was primarily ornamental, providing a counterpoint to the Qeysarieh Portal at the entrance to the Bazar-e Bozorg. The foundation stones are white marble from Ardestan and the portal itself, some 30m tall, is decorated with magnificent moarraq kashi (mosaics featuring geometric designs, floral motifs and calligraphy) by the most skilled artists of the age. The splendid niches contain complex stalactite mouldings in a honeycomb pattern; each panel has its own intricate design. Work began on this magnificent monument in 1611 and took four years to complete; deliberate mismatches in its apparent symmetry reflect the artist’s humility in the face of Allah.

Although the portal was built to face the square, the mosque is oriented towards Mecca, so a short, angled corridor was constructed to connect the square and the inner courtyard, thereby negating any aesthetic qualms about this misalignment. Inside the courtyard, there is a pool for ritual ablutions and four imposing iwans. The walls of the courtyard contain the most exquisite sunken porches, framed by haft rangi (painted tiles) of deep blue and yellow. Each iwan leads into a vaulted sanctuary. The east and west sanctuaries are covered with particularly fine floral motifs on a blue background.

The main sanctuary is entered via the south iwan. It is worth finding a quiet corner here to sit and contemplate the richness of the domed ceiling, with its golden rose pattern (the flower basket) surrounded by concentric circles of busy mosaics on a deep blue background. The interior ceiling is 36.3m high, but the exterior reaches up to 51m due to the double layering used in construction. The hollow space in between is responsible for the loud echoes heard when you stamp your foot on the black paving stones under the centre of the dome. Although scientists have measured up to 49 echoes, only about 12 are audible to the human ear – more than enough for a speaker to be heard throughout the mosque. The marble mihrab and minbar (pulpit of a mosque) are also beautifully crafted.

The main sanctuary provides wonderful views of the two turquoise minarets above the entrance portal. Each is encircled by projecting balconies and white geometric calligraphy in which the names of Mohammed and Ali are repeated almost ad infinitum. To the east and west of the main sanctuary are the courtyards of two madrasehs. Both provide good views of the main dome with its glorious profusion of turquoise-shaded tiles.