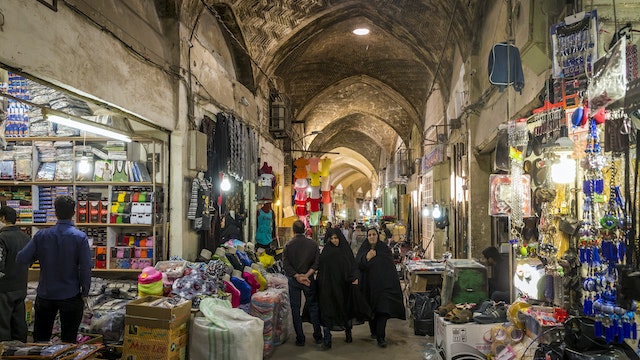 One of Iran’s most historic and fascinating bazaars, this sprawling covered market links Naqsh-e Jahan (Imam) Sq with the Masjed-e Jameh. At its busiest in the mornings, the bazaar’s arched passageways are topped by a series of small perforated domes, each spilling shafts of light onto the commerce below. While the oldest parts of the bazaar (those around the mosque) are more than a thousand years old, most of what can be seen today was built during Shah Abbas’ ambitious expansions of the early 1600s.

The bazaar is a maze of lanes, madrasehs, khans (caravanserais) and timchehs (domed halls or arcaded centres of a single trade, such as carpet vendors or coppersmiths). It can be entered at dozens of points, but the main entrance is via the Qeysarieh Portal at the northern end of Naqsh-e Jahan (Imam) Sq.

Cool in summer and warm in winter, it's easy to lose half a day wandering the bustling lanes of the bazaar, sniffing the heaps of layered spices and dishes of dried dates, watching shoppers finger coloured lengths of material, and pausing to admire the rows of red and white teapots in the many crockery shops. Teahouses help punctuate the walk and a beryani restaurant is the perfect place for lunch.