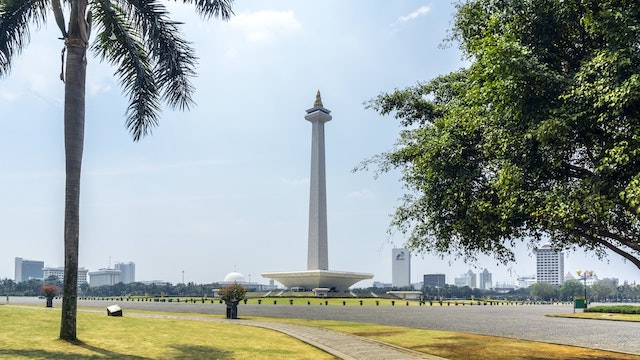 It is here that Jakartans come to take a breather from the traffic. The figurative centre of Jakarta, Merdeka Square (merdeka means independence) is actually a trapezoid measuring almost 1 sq km. In the 19th century, the Dutch called it Koningsplein (Kings Square) and it became a focal point for the city after they moved the government here from old Batavia (Kota). It's always had an important role in local life. The main entrance is on the south side.

Merdeka Square was long home to many different government buildings. Beginning with Sukarno (and continuing with Suharto) efforts were made to turn it into a real park. After many fits and starts, almost all the buildings were cleared by the mid-1990s.

Unfortunately, the government took a dim view of Merdeka's use for protest rallies during the upheavals of 1998 and 2002, and so built the massive iron fence around the square that you see today (you may still see a small protest or two outside the square when you visit). Access (and egress) is often hampered by this barrier. Still, when you're inside strolling under the trees, watching kids play pick-up football, discovering the deer enclosure and delighting in a simple meal, you'll fully appreciate this grand expanse.