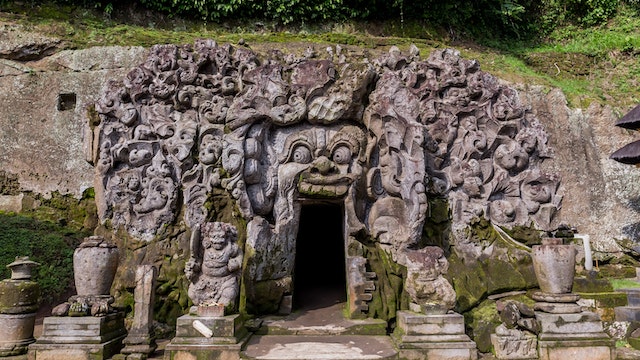 Visitors enter this rock-hewn cave through the cavernous mouth of a demon. Inside, there are fragmentary remains of a lingam, the phallic symbol of the Hindu god Shiva, and its female counterpart the yoni, as well as a statue of Shiva's son, the elephant-headed god Ganesha. Outside, two square bathing pools have waterspouts held by six female figures. Located 2km southeast of Ubud on the road to Bedulu, the compound has a sideshow atmosphere and is inevitably crammed with foreign tourists.

There were never any elephants in Bali (until tourist attractions changed that); ancient Goa Gajah probably takes its name from the nearby Sungai Petanu (Petanu River), which at one time was known as Elephant River, or perhaps because the face over the cave entrance might resemble an elephant.

The origins of the cave are uncertain; one tale relates that it was created by the fingernail of the legendary giant Kebo Iwa. It probably dates to the 11th century, and was certainly in existence during the Majapahit takeover of Bali. The cave was rediscovered by Dutch archaeologists in 1923, but the fountains and pool were not found until 1954.

From Goa Gajah you can clamber down through the rice paddies to Sungai Petanu, where there are crumbling rock carvings of stupas (domes for housing Buddhist relics) on a cliff face, and a small cave.

As it's a popular stop for tour buses, try to get here before 10am to avoid the crowds.