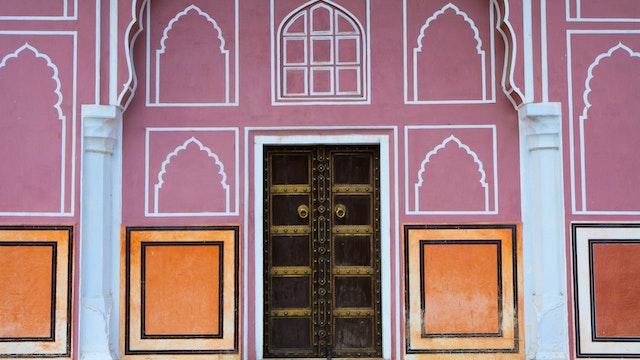 A complex of courtyards, gardens and buildings, the impressive City Palace is right in the centre of the Old City. The outer wall was built by Jai Singh II, but within it the palace has been enlarged and adapted over the centuries. There are palace buildings from different eras, some dating from the early 20th century. It is a striking blend of Rajasthani and Mughal architecture.

The price of admission includes entry to Royal Gaitor and the Cenotaphs of the Maharanis, as well as to Jaigarh, a long climb above Amber Fort. This composite ticket is valid for two days and costs Indians an extra ₹60 on top of City Palace entry (no extra cost for foreigners).

Entering through Virendra Pol, you’ll see the Mubarak Mahal (Welcome Palace), built in the late 19th century for Maharaja Madho Singh II as a reception centre for visiting dignitaries. Its multiarched and colonnaded construction was cooked up in an Islamic, Rajput and European stylistic stew by the architect Sir Swinton Jacob. It now forms part of the Maharaja Sawai Mansingh II Museum, containing a collection of royal costumes and superb shawls, including Kashmiri pashmina. One remarkable exhibit is Sawai Madho Singh I’s capacious clothing; it’s said he was a cuddly 2m tall, 1.2m wide and 250kg.

The Anand Mahal Sileg Khana – the Maharani’s Palace – houses the Armoury, which has one of the best collections of weapons in the country. Many of the ceremonial items are elegantly engraved and inlaid, belying their grisly purpose.

Set between the Armoury and the Diwan-i-Am art gallery is an open courtyard known in Sanskrit as Sarvatobhadra. At its centre is a pink-and-white, marble-paved gallery that was used as the Diwan-i-Khas (Hall of Private Audience), where the maharajas would consult their ministers. Here you can see two enormous silver vessels, each 1.6m tall and reputedly the largest silver objects in the world.

Within the lavish Diwan-i-Am (Hall of Public Audience) is this art gallery. Exhibits include a copy of the entire Bhagavad Gita handwritten in tiny script, and miniature copies of other holy Hindu scriptures, which were small enough to be easily hidden in the event that zealot Mughal armies tried to destroy the sacred texts.

Beyond this chowk (square) is the private palace, the Chandra Mahal, which is still the residence of the descendants of the royal family; you can take a 45-minute Royal Grandeur guided tour of select areas.