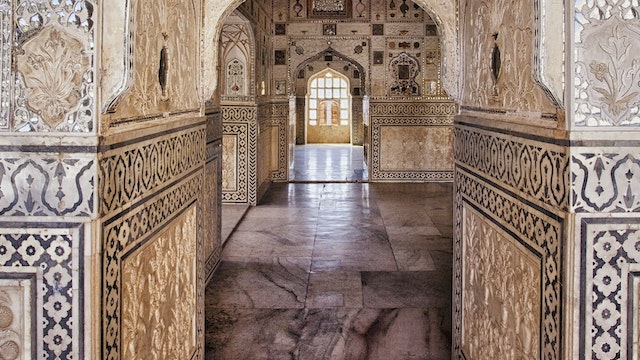 This magnificent fort comprises an extensive palace complex, built from pale yellow and pink sandstone, and white marble, and is divided into four main sections, each with its own courtyard. It is possible to visit the fortress on elephant-back, but animal welfare groups have criticised the keeping of elephants at Amber because of reports of abuse, and because carrying passengers can cause lasting injuries to the animals.

As an alternative, you can trudge up to the fort from the road in about 10 minutes, or take a 4WD to the top and back for ₹450 (good for up to five passengers), including a one-hour wait time. For night entry, admission for foreigners drops to the Indian price.

However you arrive, you will enter Amber Fort through the Suraj Pol (Sun Gate), which leads to the Jaleb Chowk (Main Courtyard), where returning armies would display their war booty to the populace – women could view this area from the veiled windows of the palace. The ticket office is directly across the courtyard from the Suraj Pol. If you arrive by car you will enter through the Chand Pol (Moon Gate) on the opposite side of Jaleb Chowk. Hiring a guide or grabbing an audio guide is highly recommended, as there are very few signs and many blind alleys.

From Jaleb Chowk, an imposing stairway leads up to the main palace, but first it’s worth taking the steps just to the right, which lead to the small Siladevi Temple, with its gorgeous silver doors featuring repoussé (raised relief) work.

Heading back to the main stairway will take you up to the second courtyard and the Diwan-i-Am (Hall of Public Audience), which has a double row of columns, each topped by a capital in the shape of an elephant, and latticed galleries above.

The maharaja’s apartments are located around the third courtyard – you enter through the fabulous Ganesh Pol, decorated with beautiful frescoed arches. The Jai Mandir (Hall of Victory) is noted for its inlaid panels and multimirrored ceiling. Carved marble relief panels around the hall are fascinatingly delicate and quirky, depicting cartoon-like insects and sinuous flowers. Opposite the Jai Mandir is the Sukh Niwas (Hall of Pleasure), with an ivory-inlaid sandalwood door and a channel that once carried cooling water right through the room. From the Jai Mandir you can enjoy fine views from the palace ramparts over picturesque Maota Lake below.

The zenana (secluded women’s quarters) surrounds the fourth courtyard. The rooms were designed so that the maharaja could embark on his nocturnal visits to his wives’ and concubines’ respective chambers without the others knowing, as the chambers are independent but open onto a common corridor.

The Amber sound-and-light show takes place below the fort in the complex near Maota Lake.