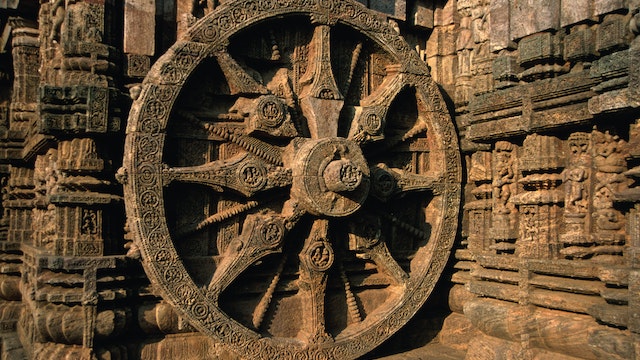 Conceived as the cosmic chariot of the sun god Surya, this massive, breathtakingly splendid temple was constructed in the mid-13th century, probably by Odishan king Narashimhadev I to celebrate his military victory over the Muslims. Around the base, seven rearing horses (representing the days of the week) move the stone leviathan on 24 stone cartwheels (representing the hours of the day). The temple was positioned so that dawn light would illuminate the deul (temple sanctuary) interior and the presiding deity.

The temple was in use for maybe only three centuries. In the late 16th century the 40m-high sikhara (spire) partially collapsed: speculation about causes ranges from marauding Mughals removing the copper over the cupola to a ransacking Kalapahad displacing the Dadhinauti (arch stone), to simple wear and tear from recurring cyclones. The presiding deity may have been moved to Jagannath Temple in Puri in the 17th century; the interior of the temple was filled in with stone in 1903 by the British.

The temple has been under constant and careful restoration for years now, and its gradual weathering continues to this day. Every year, crumbling sections of ornate wall panels are replaced by new blocks (featuring unremarkable motifs sculpted by modern hands), and the structure slowly sheds the sculptural brilliance that made it so special in the first place.

The gajasimha (main entrance) is guarded by two stone lions crushing elephants and leads to the intricately carved nritya mandapa (dancing hall). Steps, flanked by straining horses, rise to the still-standing jagamohan (assembly hall). Behind is the spireless deul, with its three impressive chlorite images of Surya aligned to catch the sun at dawn, noon and sunset. The chariot concept of the temple harks back to a stylistic trend in Indian architecture, reflected in the stone chariot at the Vittala Temple in Hampi and the Pancha Rathas complex (featuring five stone chariots devoted to the Pandavas from the Mahabharata) in Mahabalipuram.

Persistent guides (₹150) will approach you at the entrance. The temple’s history is a complicated amalgam of fact and legend, and religious and secular imagery, and the guides’ explanations can be thought-provoking. But make sure you get a government-approved one; all licensed guides wear their official ID on them and should be easy to spot.